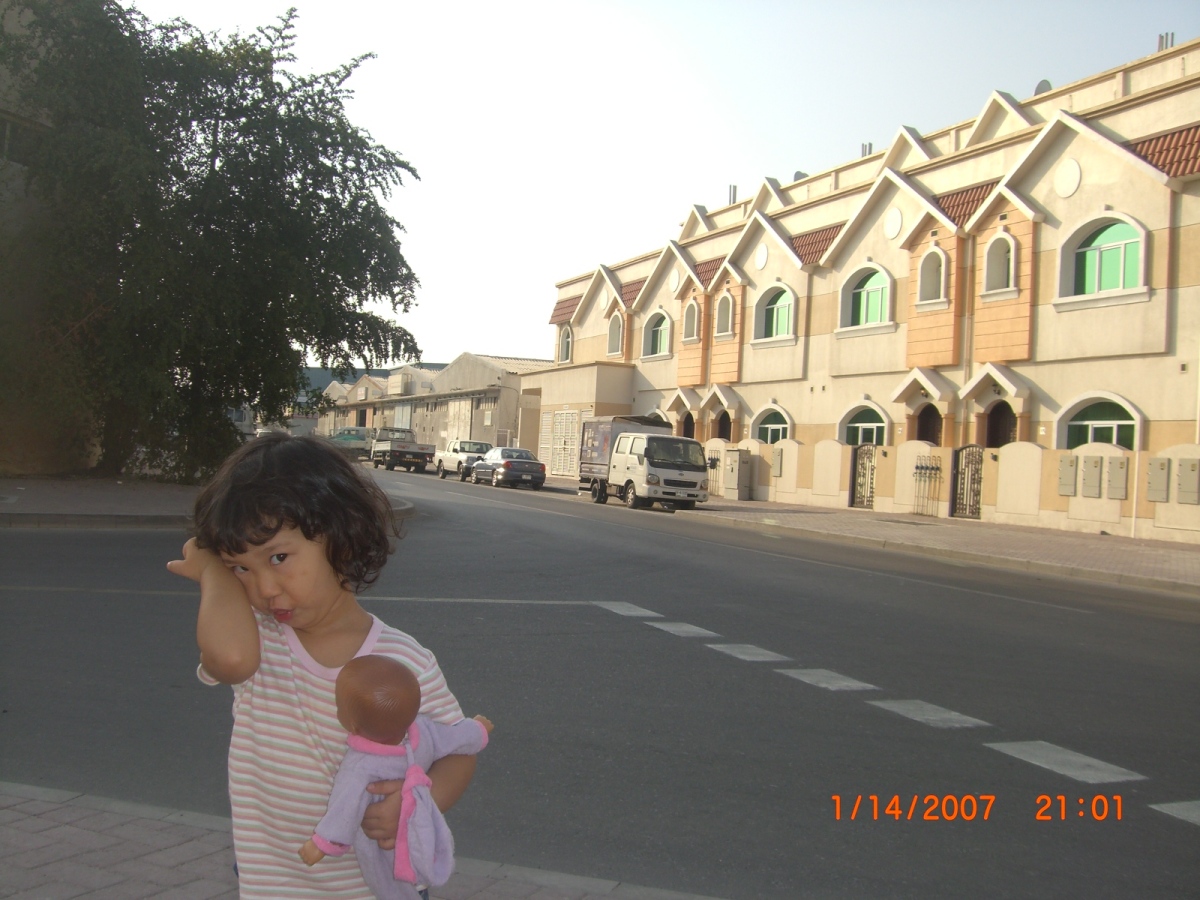 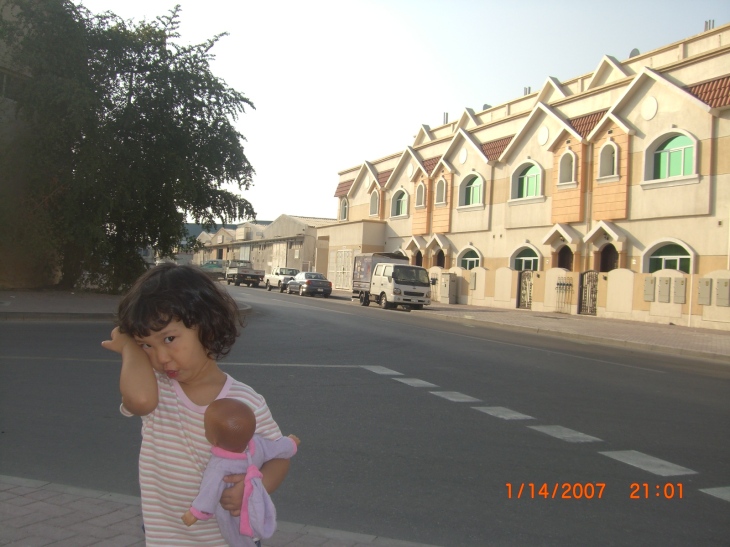 The above photo was taken exactly NINE years ago, today. It was the morning after we landed in Dubai from a long flight from Japan (my camera even still showed Japan time). Our daughter Pristine had just turned 3 years old and I just started working at my current company. We moved to Dubai without any concrete life plans other than “testing the waters” and that whatever happens, we could always go back to Japan.

I still don’t know until when we’ll be here but for now (we are asked that expat year end question again and again), Dubai is (still) home. I lived in Japan for 10 years and 3 months. Do you think I’ll surpass that record in Dubai? 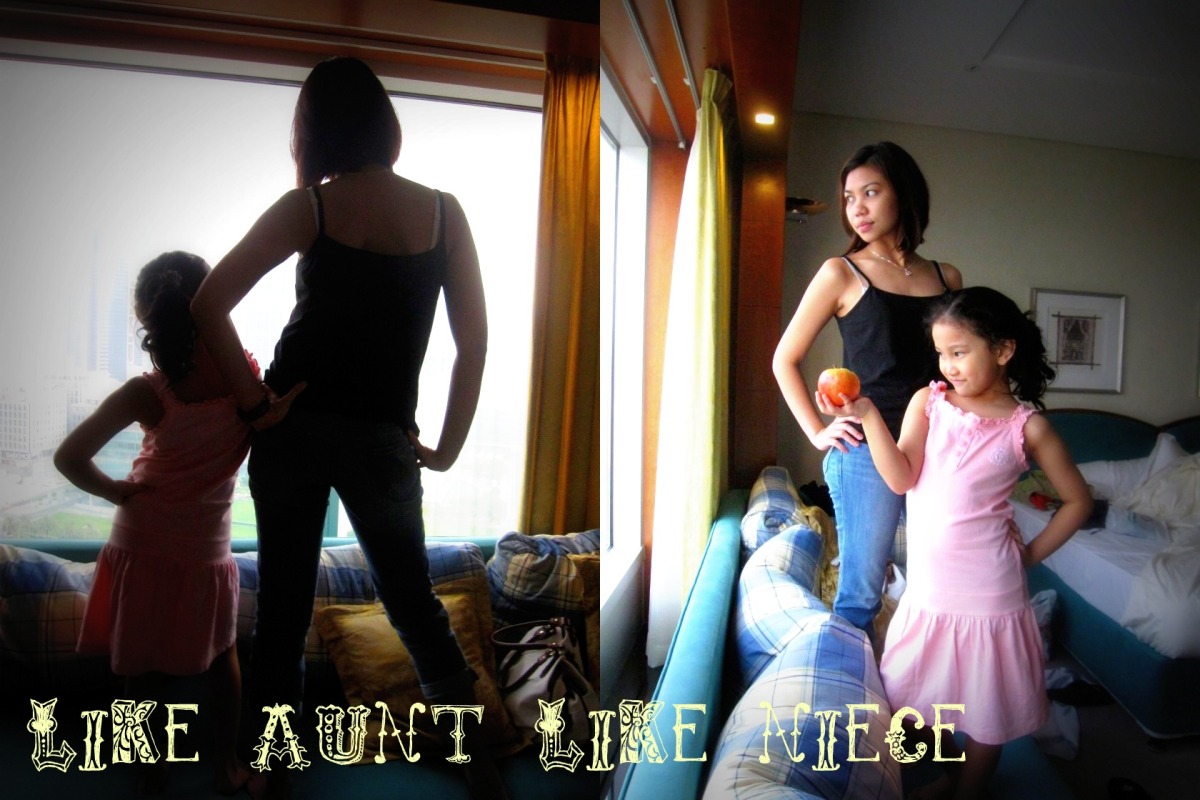 We stayed at the Jumeirah Emirates Towers Hotel, one of Dubai’s soaring symbols last weekend to celebrate our 8th wedding anniversary. After relocating to Dubai, we decided to save up and make it a tradition to stay at a city hotel every year on our anniversary to take a break from our monotonous day to day rush. We started in 2009 at The Palace Hotel and in 2010, at the Crowne Plaza Hotel. For all our anniversary getaways, Pristine has always been with us. She loves exploring places – vacations, visiting friends – just going to places different. She LOVES it when we stay at hotels and almost always begs for another day when we are about to check out!

*How in the world did my thunder thighs get in the picture, I don’t know!*

Standing at 309 meters, the Jumeirah Emirates Towers is one of the tallest hotel buildings in the world and the architecture is simply beautiful. In 2007, when we were so new to Dubai, we took a photo just across it and hoped one day we could stay. It took us four years but the wait was really worth it.

Dubai hotels offer a lot of discounts during summer when the deluge of tourists come to a mild halt due to the extreme weather (highs of up to 120F). This is where residents like us do a happy dance. Included in our room stay are complimentary passes to Wild Wadi Waterpark…

….30% off on dining bills at all the restaurants in the hotel and voila, even an anniversary cake!

Pristine and M went to the hotel first since I had to work on the day we checked in and when I arrived, they already consumed almost half of the cake! Oh well, it saved me from overshooting my daily calorie intake.

We were on the 13th floor. The husband didn’t seem to mind that but I slightly did after all, 13 isn’t a favorable number (although my life has been surrounded by a lot of “number 13“). I asked a few people on Twitter and most of them said, they won’t mind and one smartie was quick enough to point that it’s not the 13th floor anyway, if you count the ground floor as 1.

We can see the Dubai International Finance Centre from our 13th floor room window. Everything is so peaceful and quiet on an early weekend morning the next day.

The pool below us looked really nice, if only it wasn’t too hot.

Since my sister is here, we decided to bring her along with my mom and we had adjoining rooms which Pristine would shuttle back and forth and do “stuffs”.

We had a really lovely time and temporarily forgot about our hectic everyday lives outside the walls of the hotel. Who wouldn’t want to stay longer but we all had to go home.

We look forward to another year together and our next breather at a hotel somewhere – with Pristine and a little baby in tow. 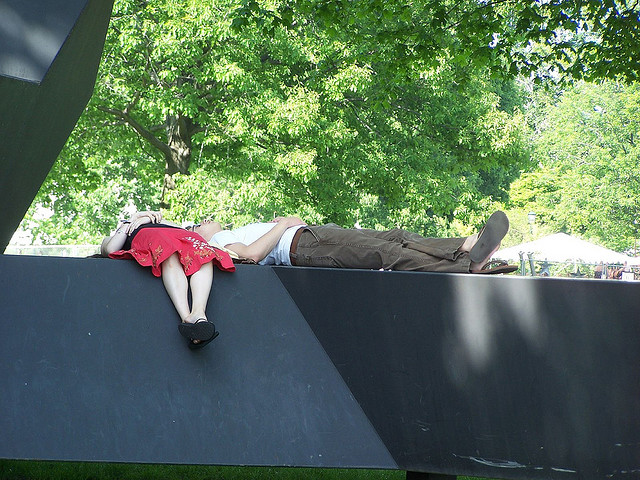 For the past couple of weeks, Pristine had been sleeping with us in a day bed connected to ours because for some strange reason, she gets blocked nose in the middle of the night at the other room. We don’t mind because it even has benefits – we are ‘forced’ to sleep earlier and thus wake up earlier and more refreshed.

The problem is – there are nights when she snores. A lot. That granny type of snore. The one that refuses to go away even if I move her. And me? I am a light sleeper. If my husband starts snoring in the future (knock on wood), I guess one of us had to transfer to the other room or file for divorce. I’ve not been sleeping well for the past days because of her snoring loud. I asked my mom to take Pristine just for one night while I cope up with my lack of sleep. Pouting however, off to the other room she went.

I woke up when the husband came home at 11pm after afternoon shift from work (that ended at 10pm). He saw the kid was not there. He smiled.

Stop. It’s not about that.

It’s not like we need to get something done and a child in our bedroom is a disturbance. *cough cough*

The man is a night owl. He changed into his pajamas, lay down beside me and started… CHATTING – about his day at work, his lunch, the news today, Arnold Schwarzenegger, among other things. The man just couldn’t stop! I was only half awake. His chatting marathon lasted for 2 hours!

Dude, I have work tomorrow!

Husband: “It’s my day off tomorrow.”

…that’s why he’s talking like there’s no end. Because he has no work tomorrow and he can sleep in! And also said because it’s the only time we can really talk without interruption.

Point taken, yeah but I really wanted some sleep and by the time he dozes off, I’d probably be waking up to pee again and again. (tiny pregnant bladder is the evil)

By the way, we’ve been married for 8 years today. Though sometimes these sleepless nights get to me, I still look forward to more years with the same man…and a lot of stories together!

After one year, you know when you’re in Dubai when:

1. The beauty salons have painted doors that you can’t see what/who is inside. Sometimes, it looks like a plain wall until the someone opens the door!

2. People bid millions of dirhams for a car plate.

3. Overt shows of affection between a man and a woman are frowned upon but no one blinks and eye at two men holding hands.

5. You can’t find any pork products even a simple bacon on major supermarkets like Carrefour.

6. But there are over 100 brands of catsup occupying one entire lane of the supermarket.

7. The malls are open until past 12 midnight!

8. Children are more awake than you are at 10 pm inside the malls on Thursday/Friday nights.

9. Your laundry basket has no socks in it because you never wear them!

10. Going out for a barbeque on any day is possible, without the worry of rain.

11. You see a woman in a g-string and a woman covered in black cloth all over in the same beach spot, wading in the same waters!

13. You get excited when it rains!

It’s exactly one year since we stepped out of Emirates Airlines at Dubai International Airport on January 13, 2008. It’s just remarkable to think how time went so fast. I guess this is what happens when you blink.