The boy in red shirt is Benjamin. He is my 4 year old son. Does he look normal to you?

Yes, he looks normal because YES, he is normal. Except for lingering longer during the breastfeeding period, not knowing how to use the bottle and difficulty in potty training, I see nothing wrong with him. He is an active, chatty boy who is curious about everything, very lovable and very bright.

However, we have a slight problem. Maybe just a little bit of a late bloomer.

He is turning 5 years old late this year and it seems that no school (so far) wants to accept him for kindergarten. Why? Because they think that something is wrong with him. They have not made their concerns that clear and vocal but last year one of the schools we applied for told me, “he is not ready”.

We’ve been to a couple of schools for assessments if he is ready for the big school. The first one was last year to enroll him in kindergarten 1 (Foundation Stage 1). Prior to that, he was just staying at home so there were tears during assessment period and the school suggested we put him in a play school first.

After a few months at the playschool, his teacher says she thinks Benjamin is ready for the big school, he memorizes things quickly, he loves to play and can communicate his needs to his teacher and his play mates. She suggested we find a school for him so he can transfer.

We opted he spend the whole year in play school just to be sure (plus, it’s difficult to find schools that accept transfer students mid-year).

Now, registrations and assessments have started for the 2016-2017 school year. Benjamin went in for another assessment last week. Today I got a call and was giddy, thinking nothing but positive things.

But then they asked us to take him there again for FURTHER assessment next week. My God, he is not going to Harvard University! Why so rigid?

You need me? Come again in a few hours.

//platform.instagram.com/en_US/embeds.jsI already know the reason, the same as before – he is shy, not responding to any interrogation, maybe eyes on the floor, stiff and shy around other kids his age (that he doesn’t know), in an enclosed space of the classroom. Outside in the parks, he doesn’t care about the other kids but if you put him in a room with other kids, he will create his own world…until he warms up to them. It will take TIME and a few minutes of “assessment” won’t be able to see that he is perfectly FINE – if only they’d give him a chance! He also can’t write his name yet. Why? Because to be honest – I was not hard core in teaching him to write letters or color within borders or to memorize the alphabets or numbers (though we read a lot at home and play with maps because he loves it before he turned 2!).

I know so many parents becoming stressed out to get their child ready for kindergarten that sometimes they miss out on the wonderful moments of love, exploration, curiosity, and play. 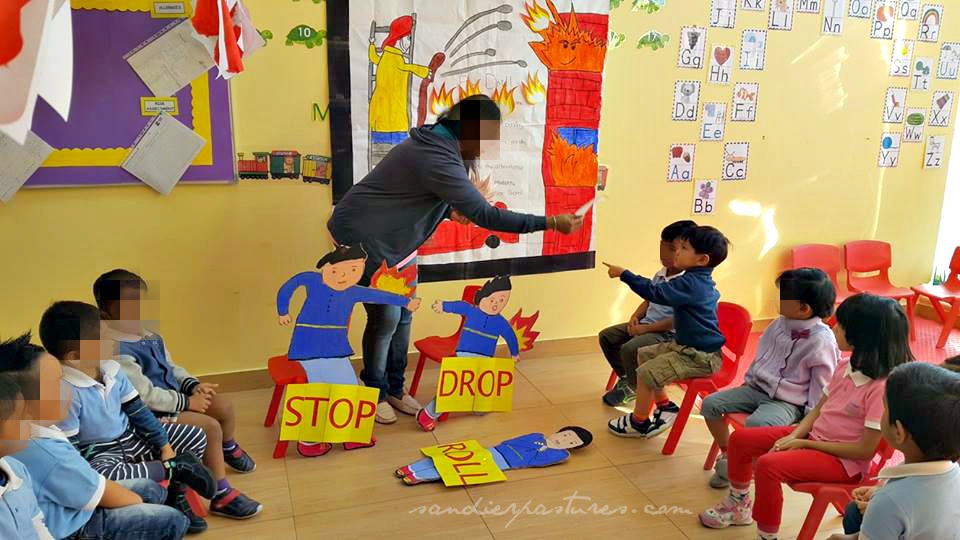 No matter how I explain to them that he is a normal boy at home and at places where he is familiar with the people around him (like in his nursery school), they will always judge the shy and aloof boy they see for a couple of minutes. I am upset because I don’t know what to do to make him less shy or to talk to strangers when they greet him hello (it’s very rare he answers back if he doesn’t know the person talking to him). But his nursery teacher says she finds no learning/behavioral disability.

Interesting mirrors at the lobby. “Look mama, we’re all over the place!” A photo posted by Grace | Sandier Pastures (@sandierpastures) on Aug 11, 2015 at 3:29pm PDT

//platform.instagram.com/en_US/embeds.jsI am afraid that at this rate, my son could not go to school because it seems that schools only accept the “easy” kids: immediately social and chatty and probably can already write their names. And Benjamin is not. It’s part of his personality that I cannot change, for now, even how hard I try.

In less than a month, #Chataro, the Shiba dog we’ve been fostering for the past 3 months will be going back to his owner. How would he cope?

Benjamin talks A LOT at home (up to the point of being noisy sometimes) and he sings the songs he learns at the nursery. He is ready for kindergarten, why would he not be?

Don’t you just wish all kindergarten teachers tell you, “The only thing I ask of parents is that they give their child all the love and care they can provide. I will teach them once they are in my class.”?

6 thoughts on “It’s time we rethink about “kindergarten readiness””