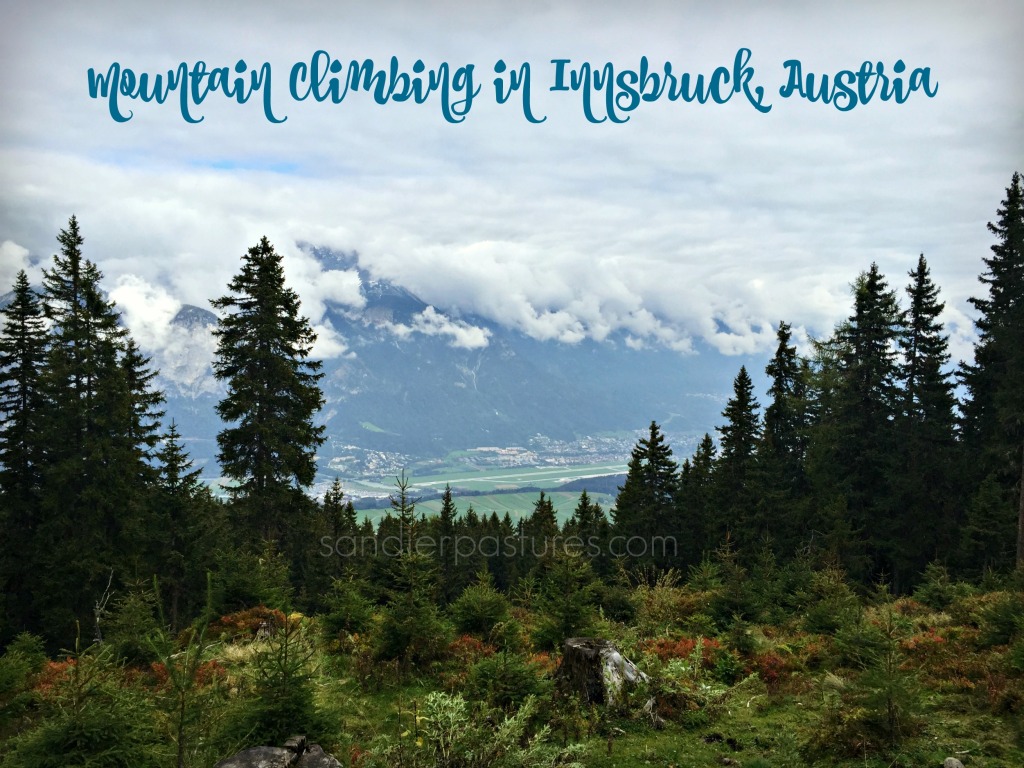 After spending 24 hours in Salzburg, I moved on to the west of Austria, to Innsbruck to visit a friend I haven’t seen since 2008 and of course to see and explore the Tyrolean capital city.

Innsbruck, is the capital city of the federal state of Tyrol (Tirol) in western Austria. It lies about half way between Munich (Germany) and Verona (Italy). Innsbruck is located in the broad valley between high mountains, the so-called North Chain in the Karwendel Alps (Hafelekarspitze, 2,334 metres or 7,657 feet – I’ve reached the peak of this! More in another post.) to the north, and the Patscherkofel (2,246 m or 7,369 ft – I’ve been to the peak of this too!) and Serles (2,718 m or 8,917 ft) to the south.

I took the train to Innsbruck from Salzburg and the travel time was a little bit over two hours. Travelling by train around Austria or within Europe for the matter can be an inexpensive travel option IF you book tickets way ahead of time and if your schedule is fixed. Check out the SparSchiene Österreich type ticket on my other post: Austria on a budget.

I would assume the view outside would have been beautiful but I was travelling at night, leaving Salzburg at 7 pm so there was nothing I could see but darkness. Interestingly, my phone’s cellular network changes from Austrian to German, meaning, there were parts of the route that was really close to the Austrian/German border. The next time I visit, it will be a longer stretch so I can hop on a train and go to Germany too.

I arrived at Innsbruck’s main station past nine pm already. My friend who lives a few minutes away from the main station has two kids both below the age of 2 and it was late for her or her husband to go out and pick me up at the station. They didn’t have to too, I was bent on challenging myself to get to to their apartment with 2 G’s: Google maps and my guts. She already told me which bus number to take and which bus stop to go down. After the short bus ride, I needed to walk for a few minutes to reach their place. It was already late, dark and cold but thankfully, Innsbruck is a very safe place. The silence on the roads made me a little anxious though, this was by far so different from the always vibrant Dubai.

The route to my friend’s house from the bus station was pretty simple, as per Google maps but me and my sense of direction…I made a couple of wrong turns and ended up circling their block dragging a heavy luggage – the sound of the wheels of my luggage on the cobblestone sidewalk was so loud with the eerie silence of the early winter night.

Long story short, I finally rang their door bell. My friend’s kids and her husband was already asleep so we had to contain our giggles! We were so happy to see each other again. We hugged and spent so much time talking, catching up that we even forgot to take a selfie before her baby roused from sleep, wanting to nurse again. I can’t believe I am already here! Weren’t we just fantasizing about this trip years before?

We slept late but me and my body clock – I always wake up early. The above photo is what’s in front of my friend’s apartment. I was there late September and I think that’s already the start of winter. There were some snow on the mountain tops.

My friend and her husband are avid mountain hikers/climbers. I was excited of the idea when her husband said we will climb a “little” mountain today but I won’t lie, I was terrified. Living in flat Dubai for nine years, I don’t think my feet are made to climb inclined terrains. Much more, my feet were already dying/dead from all the walking around Vienna and Salzburg for the past two days.

But no, not now, I should do this! My feet can die later.

The “little” mountain was 1,840 meters high. We started about halfway where we park the car and started our hike. I was only using my Nike Free shoes and I wasn’t sure how it’ll hold up with the inclined terrain but like, I had other shoes…

It was cold in the mountain at around 3 or 4 degrees celcius and lower as we got higher.

The estimated hike time to the peak at Birgitzer Alm (a small log cabin inn/restaurant) at 1,840 meters was around two hours. However, we had to take breaks, multiple breaks! This was the part where I realized how unfit I am despite doing regular cardio and strength training exercises 5-6 days a week.

Cez, my friend’s husband didn’t require any rest but had to stop because of me {thank you for understanding!} and his wife, my friend needed some break too. There’s nothing compared to the energy and endurance you have to spend when hiking an elevated terrain! He and their little girl is used to hiking on weekends.

We passed by a spring water, free flowing from the source. Mountain hikers/climbers stop by to drink water and refill their bottles here. The water was delicious!

My friend and I as we almost reached the peak. 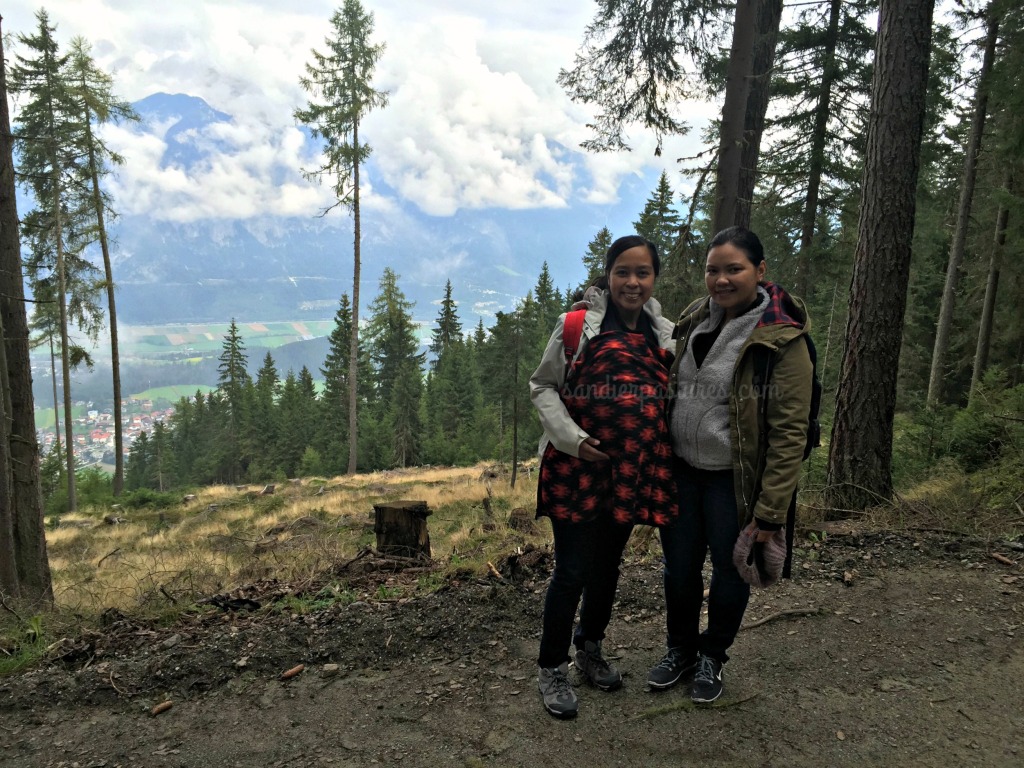 The view of Innsbruck and the little villages from where we stood was beautiful. And look, we’re above the clouds! One more thing that made us feel we were on Cloud 9? Me, that I was able to survive our hike up. Lack of proper sleep and semi-dead feet yet I’ve never felt more alive than ever. 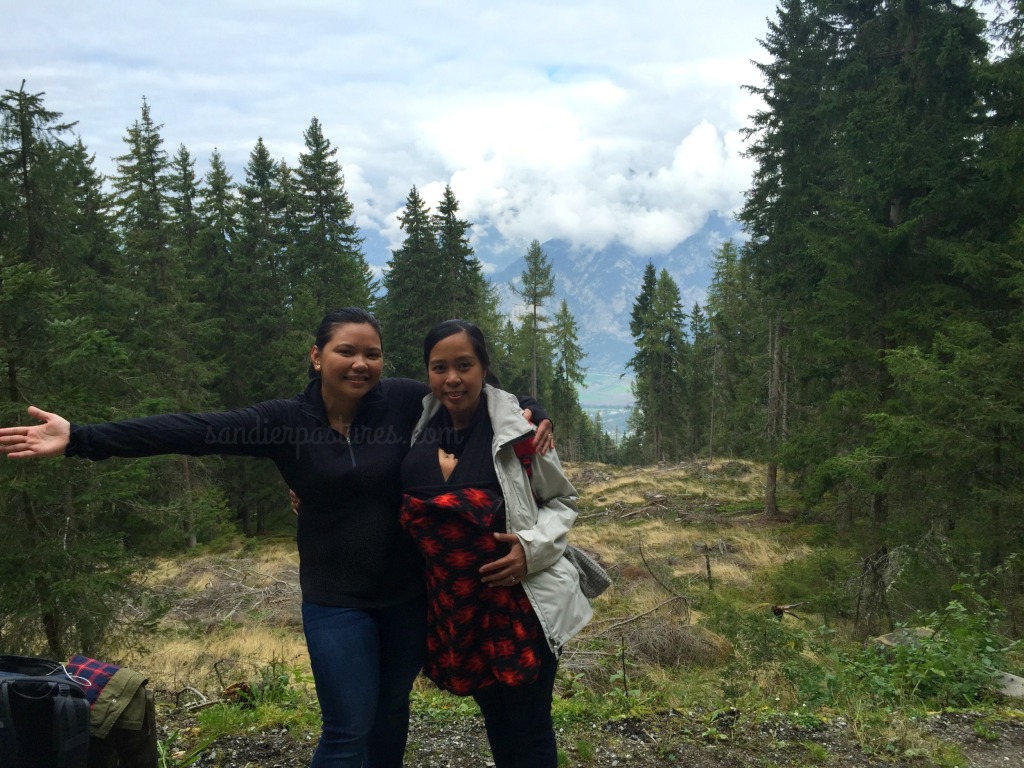 But forget about me, look at this woman beside me (and that cute little baby head peeking out!). I want you to do a silent applause for my friend. She has just given birth six weeks before when this picture was taken and now, she is mountain climbing carrying her infant! My shivering thighs were so embarrassed. She has not hiked for a long time due to pregnancy and child birth yet here she is, sharing this achievement with me, with her baby boy nestled in her chest while I only had my own body to carry!

The alm or mountain lodge/cabin offering rest and refuge for hikers was getting so near. My friend’s husband suggested we take the shortcut instead of the winding route, there’s a direct one but with steeper slope. (Yes, he’s carrying their other child, a two year old girl. This family rocks at this activity!)

I want my agony to end soon at the same time, want to take up on the challenge so I said yes. Plus I was already very hungry and they said there’s good food at the alm. Mmmmm.

Here we are!! We all still looked alive! Or not…

Thinking what to order…everything on the menu was in German language. 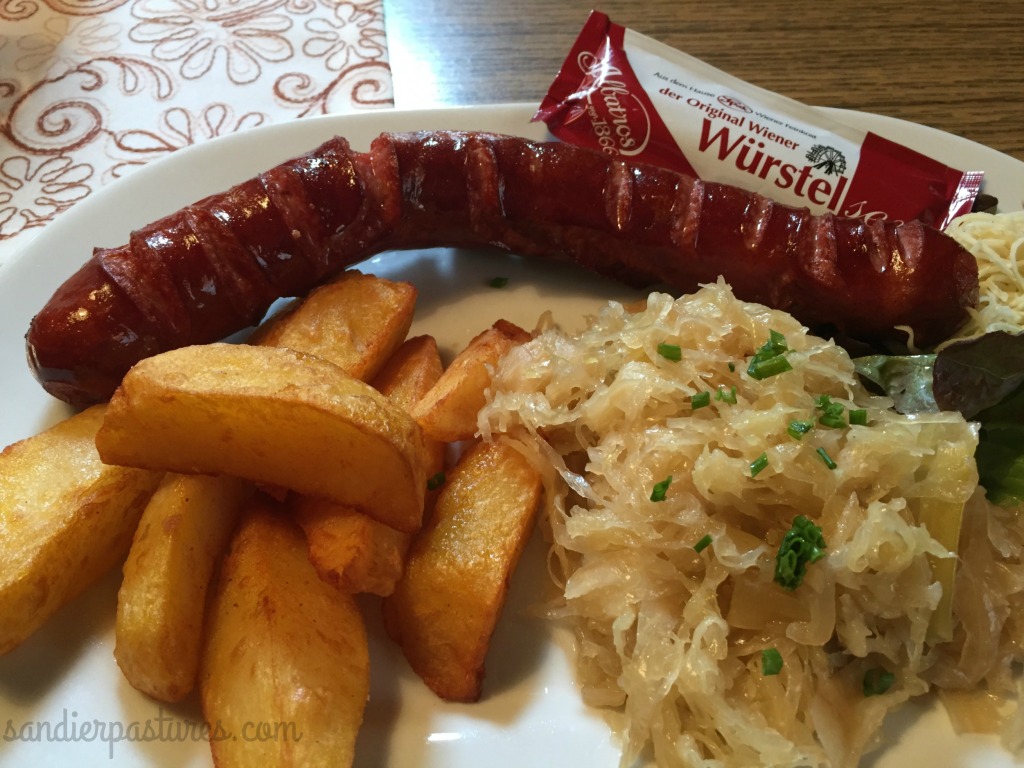 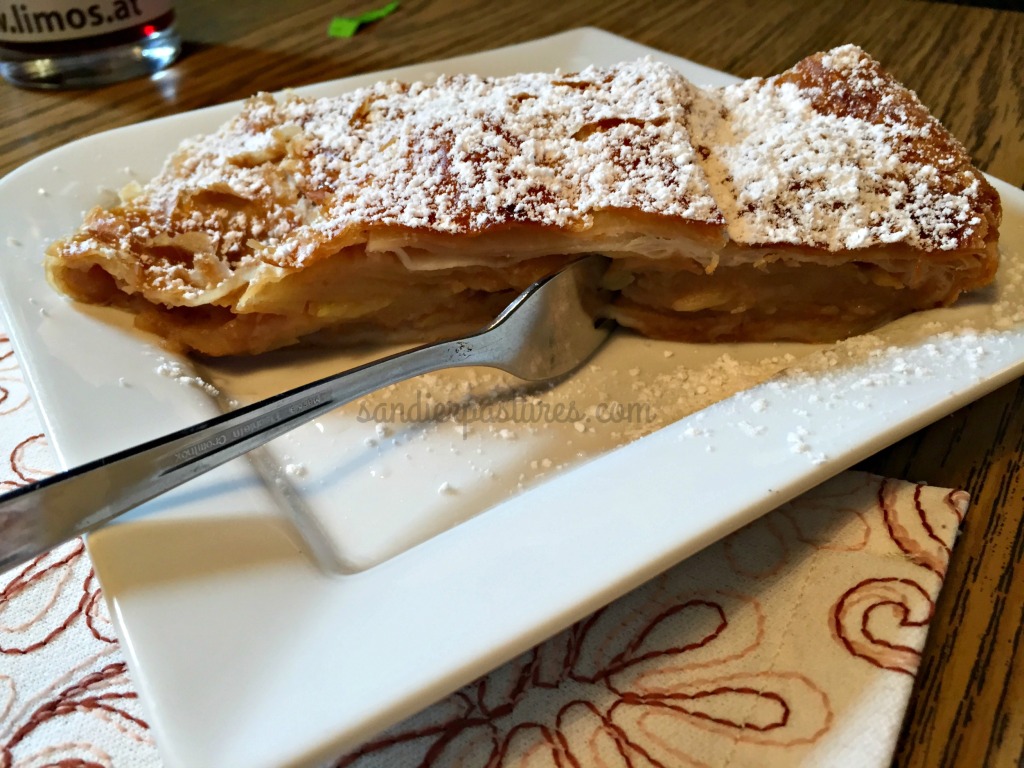 Truth be told, I wanted a cold beer but decided I would still prefer to go down the mountain on my feet, using my two legs instead of rolling downhill so… 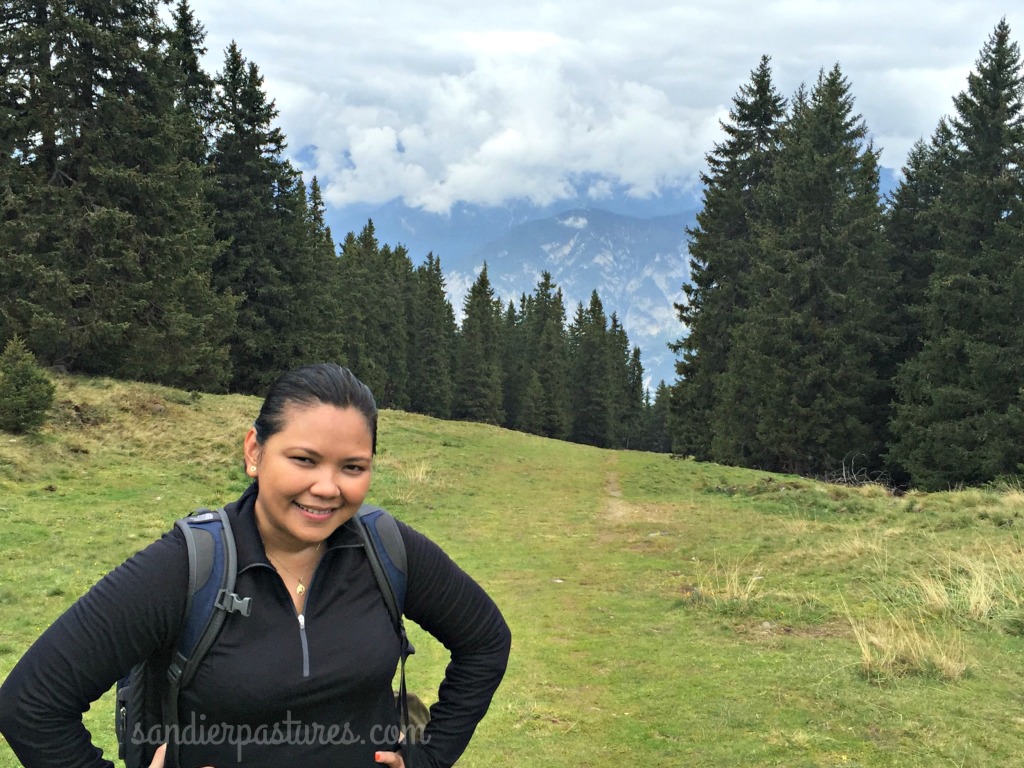 Why I’m smiling in this picture? Because we’ve conquered the tough part (climbing up) and now it’s easy peasy going down…or so I thought!! Going down was definitely NOT easy at all. You need traction, balance and lots of strength in your knees and legs.

By the time we reached our starting point, all of my legs were shaking. Golly, this was just my first day in Innsbruck and I have lots and lots of walking planned to do in the next couple of days and I didn’t pack any spare legs in my luggage!

WILL I DO IT AGAIN?

I won’t lie, it was exhausting but YES! And if I lived there, I would do this often. Maybe. Just maybe.

I want to thank my friend Melba and her husband for accommodating me in Innsbruck. I had such lovely time with them and I don’t think I could have survived climbing that mountain without them as inspiration.

4 thoughts on “Hiking in the alps at Innsbruck, Austria”