A couple of nights ago, I woke up to check on Twitter and learned that one of the Philippine’s fastest rising star in the entertainment world today, Maine Mendoza’s VERIFIED Twitter account was hacked and the hackers were maliciously posting on her accounts.

Maine is half of the phenomenal love team ‘AlDub’ (AlDub is a term coined by fans that represent a combination of Alden + Yaya Dub, their characters in a show segment “Kalyeserye”) and has a massive following on social media. Kalyeserye has gained popularity because it highlights traditional Filipino values from all aspects of life including old style of courting between two of the main characters. The witty and funny dialogues of the characters provides good, clean entertainment that’s very addicting.

Her appeal to the masses is undeniable and inexplicable, I could say it’s simply “magical”. I am one of her millions of fans and will shamelessly admit that I have spent time watching her segment on a noon time show after work, after I tuck the kids in bed. I am at work when it airs live Philippine time so I am Team Replay but I follow the updates closely on Twitter and couldn’t wait to get home to watch it everyday!

Maine Mendoza just celebrated her 4th month in the entertainment industry. Only FOUR short months and together with Alden Richards, the other half of the AlDub love team, she’s bagged TV commercials from major brands and more in line, had been the cover of magazines, their/her face is all over the huge billboards in Metro Manila.

And how can we forget October 24, 2015 when a show called Tamang Panahon featuring their most awaited meeting filled the Philippine Arena, the world’s largest indoor arena with 55,000 seating capacity?

This popular TV couple in the Philippines have smashed a social media record. 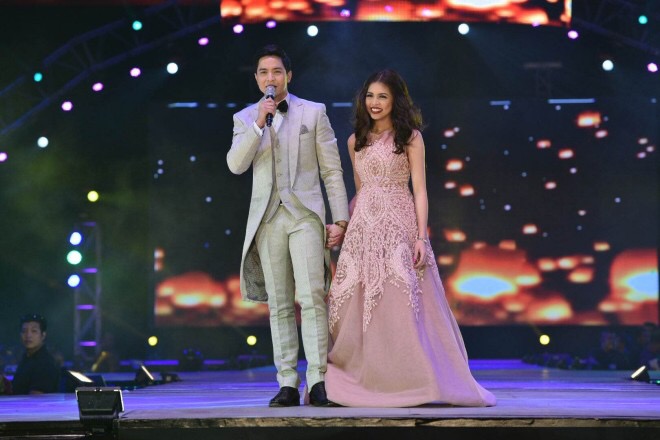 A lot has happened in her 4 short months stint in show business but her charming, down to earth and very likeable personality has got her etched in the hearts of the people in the Philippines and abroad.

Maine rose to fame in break neck speed. Her Twitter account is the fastest growing account next to Taylor Swift and Katy Perry. Once a very private person living a quiet life, she can’t go outside unnoticed anymore. Life has changed for Maine Mendoza, the one she wished for.

But what is the prize of fame?

Sadly, there is always envy in the hearts of people who can’t be happy with the success of others.

Maine has been considered a “threat” to the rival network. Their ratings have gone down and TV commercials, the bread and butter of every television network has drastically lessened. Maine is the current gold mine. She is the bomb. Even the lipstick brand and shade she is using (and not endorsing) has been sold out all over the country. Everything she touches turns to gold, including Alden Richards’ career.

Last Tuesday, Maine Mendoza’s Twitter account was hacked by the activist (hacktivist) group AnonymousPH. The hacking incident headlined local newspapers and even featured abroad too in, Mashable just to name one. 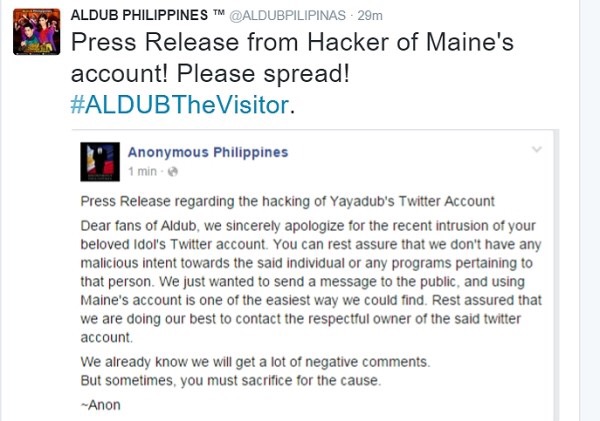 First, the group said they hacked her Twitter account to be able to spread their message (a rally against the government on November 5). The next thing we knew, they are threatening to leak her private messages. And they released a statement that they are enraged how AlDub has become too much of a distraction for the Filipino people, it made the public become blind and deaf of the country’s real issues. WTF. Blaming a 30 minute show for the country’s problems. If at all, this short segment provides a temporary relief for everyone from different walks of life in the Philippines, with most people living below poverty line.

And then there’s a circulating speculation that the hackers were paid to do a demolition job – to invade Maine’s privacy, tarnish her name and ultimately demolish the growing popularity. The hackers even threatened to release information about her private messages (her email, Instagram and Facebook and Twitter were all hacked). They later claimed they did not find anything lewd to leak so they returned her accounts. (That was why Ms. Mendoza though disappointed, was not too distraught with the hacking because she has no embarrassing things in her account…)

The reality of cyber bullying is sad and disgusting. It makes people who are active online feel unsafe.

I’ve been blogging for at least 10 years and active on other social media platforms and this this incident made me think a lot – no one is really safe.Celebrity or not, cyber bullying is real and a scary matter as long as there is envy, hate and maybe just bored people wanting to make a scene and disrupt the peace of others.

Whether we have embarrassing things in our private messages or not, it’s time we rethink about online security and secure our accounts. Reset, strengthen our passwords and be vigilant.

Have you been a victim of hacking/cyber bullying? Has it ever crossed your mind that you could be a victim one day?

Helpful reference: What to do when your social media accounts are hacked from StaySafeOnline.org

One thought on “Hacking could happen to any of us (even Verified Twitter users!)”