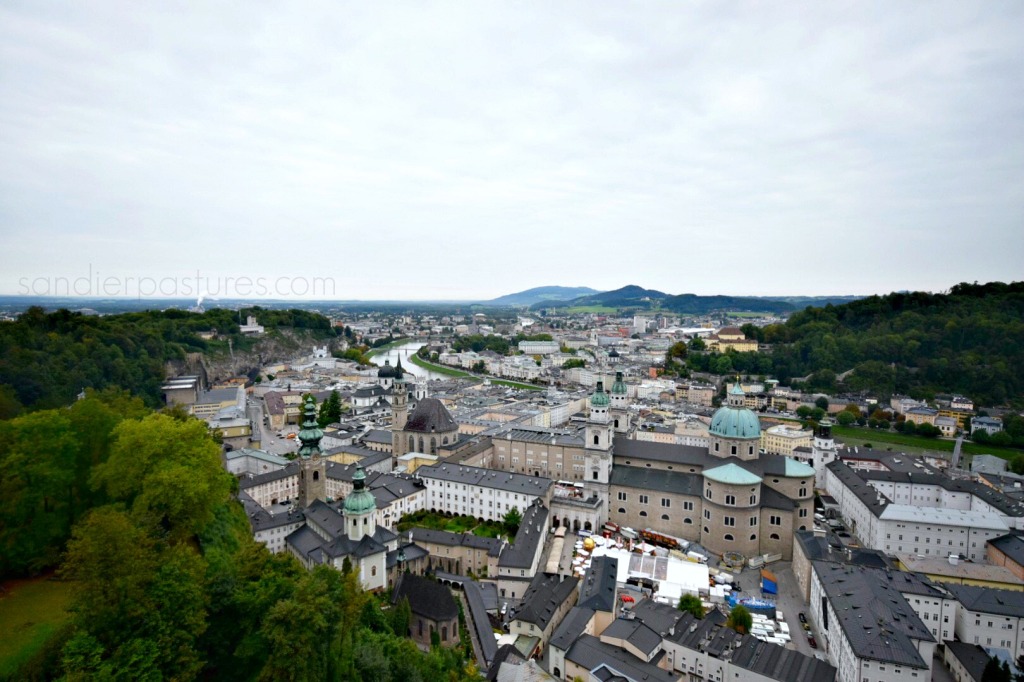 Salzburg is a charming place in Austria. No, scratch that, I’d say it’s a magical place. I already fell in love with Austria after spending 24 hours in Vienna but when I arrived in Salzburg, I feel that love intensify. 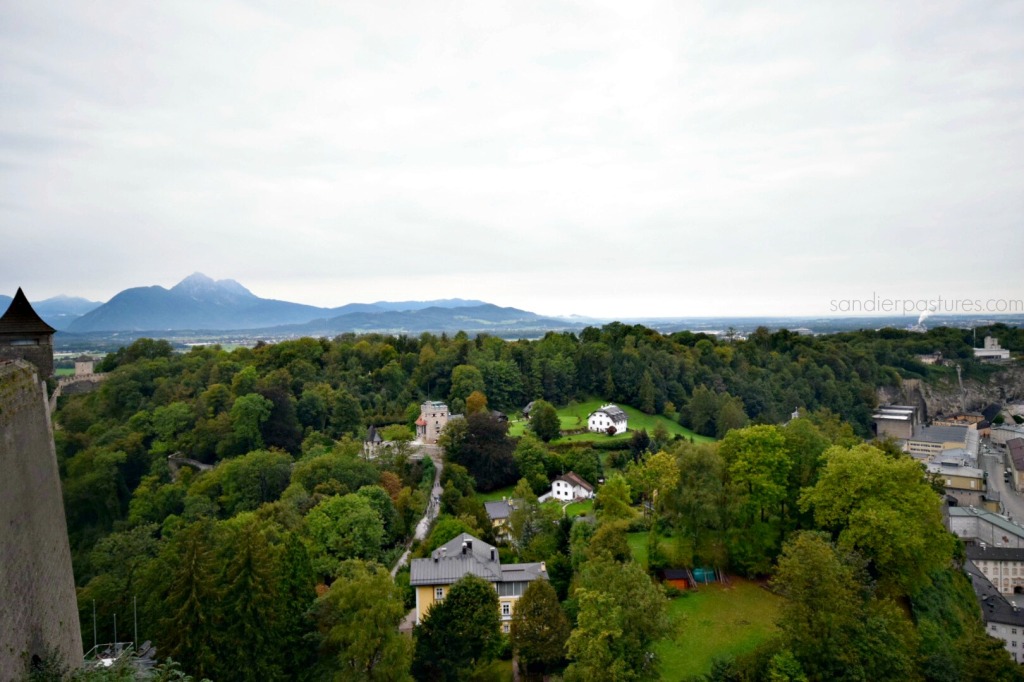 This post is about how I spent my 24 hours in Salzburg (in actuality, it’s less than 24 hours!) and I will tell you now at the beginning of this post: Do NOT spend 24 hours in Salzburg because…the city deserves MORE! But if you do not have any choice and only have a day, well, read on.

Unless you are travelling on a tour package, the first you must do once you arrive in Salzburg and especially if you have limited time to explore the city is to go to the Salzburg Info Center located at Mozartplatz at the Old Town.

The staff are very friendly, speaks English and willing to help you plan out your itinerary for the day. Pick up a free map and purchase the Salzburg card. this pass gets you access to most of the city’s main attractions for 24 hours and free access to public transport.

Reference: Why you should use the city cards in Austria

After I picked up my Salzburg card and map from the tourism office, I just crossed the street and found myself at the Old Town. The Old Town was listed by UNESCO as a World Heritage Site in 1997. Its blast-from-the-past cobbled streets and narrow alleyways, lined with houses painted in bright, beautiful colors, elegant shops and restaurants, combine with an unhurried pace of life to make it an ideal destination for a relaxing city break at any time of year.

I bet the Old Town looks better on normal days but when I was there, it was Oktoberfest and there were tables and tents and umbrella shades for this annual festival. 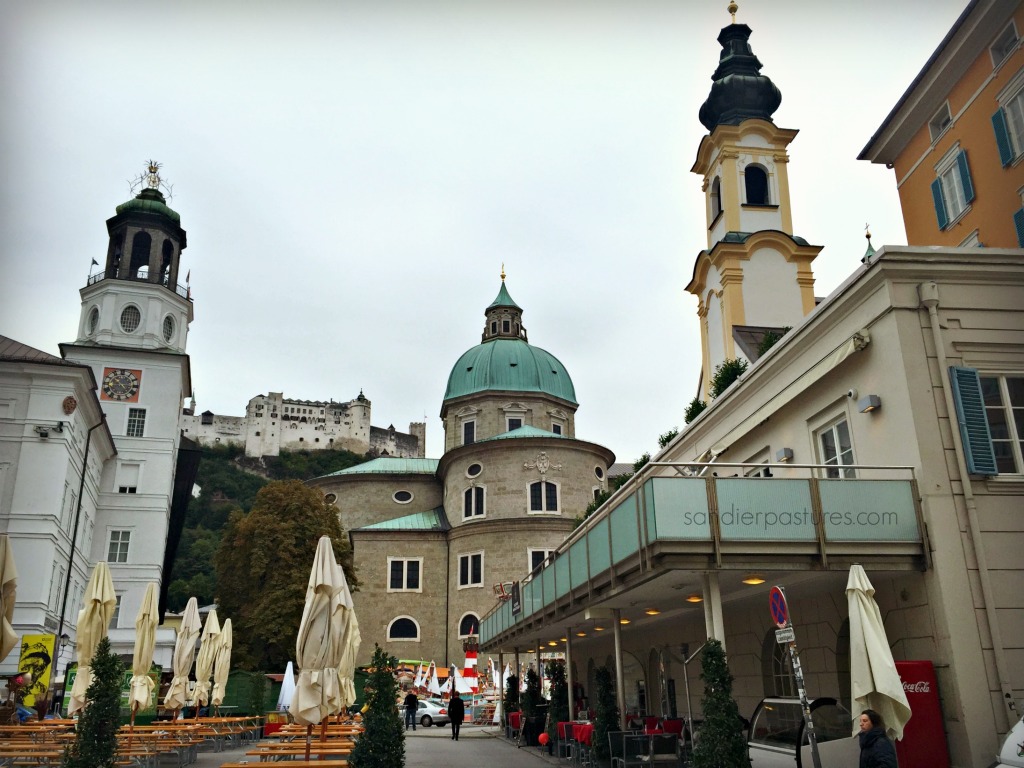 I headed to Salzburg Cathedral. I am truly amazed by the architecture and design inside the church, never mind the feels that it gave me. 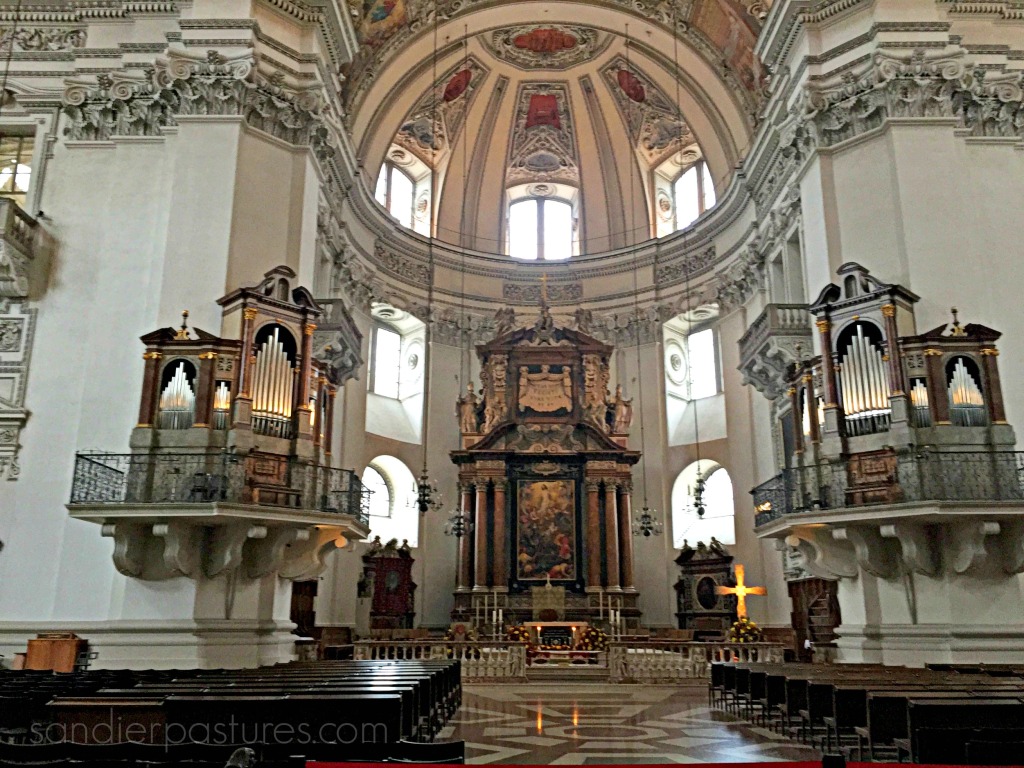 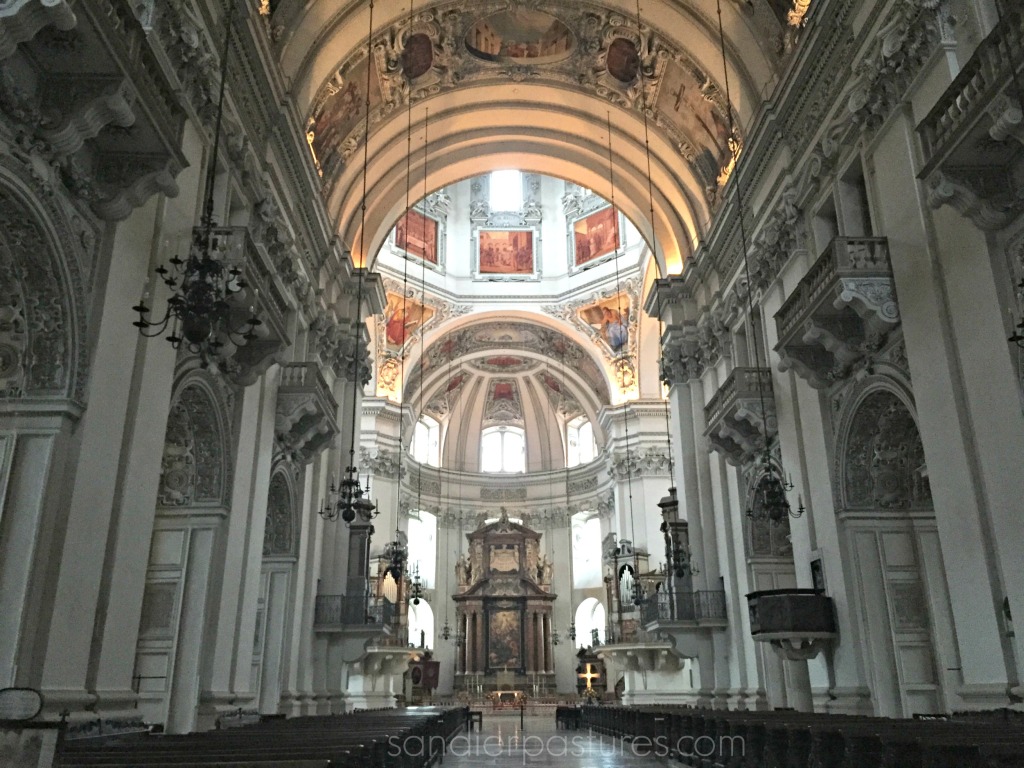 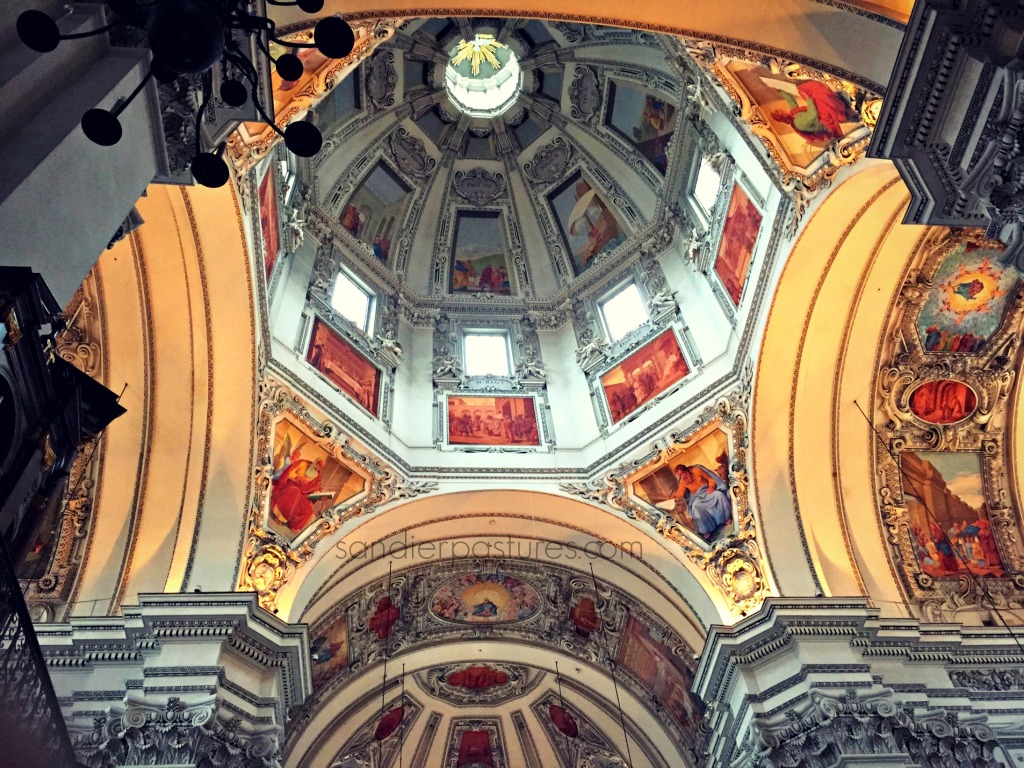 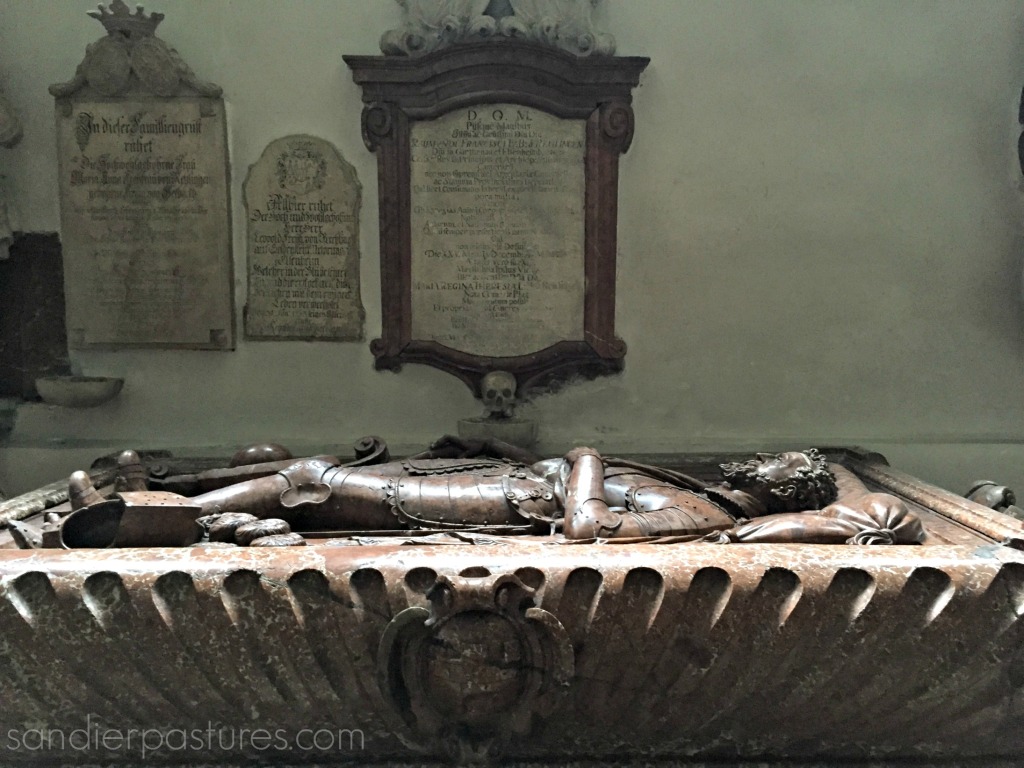 This Roman Catholic church still contains the baptismal font that was used to baptize Wolfgang Amadeus Mozart was baptized here and the interior offers fine baroque architecture. My next stop was the Salzburg Fortress, known to locals as Festung Hohensalzburg. 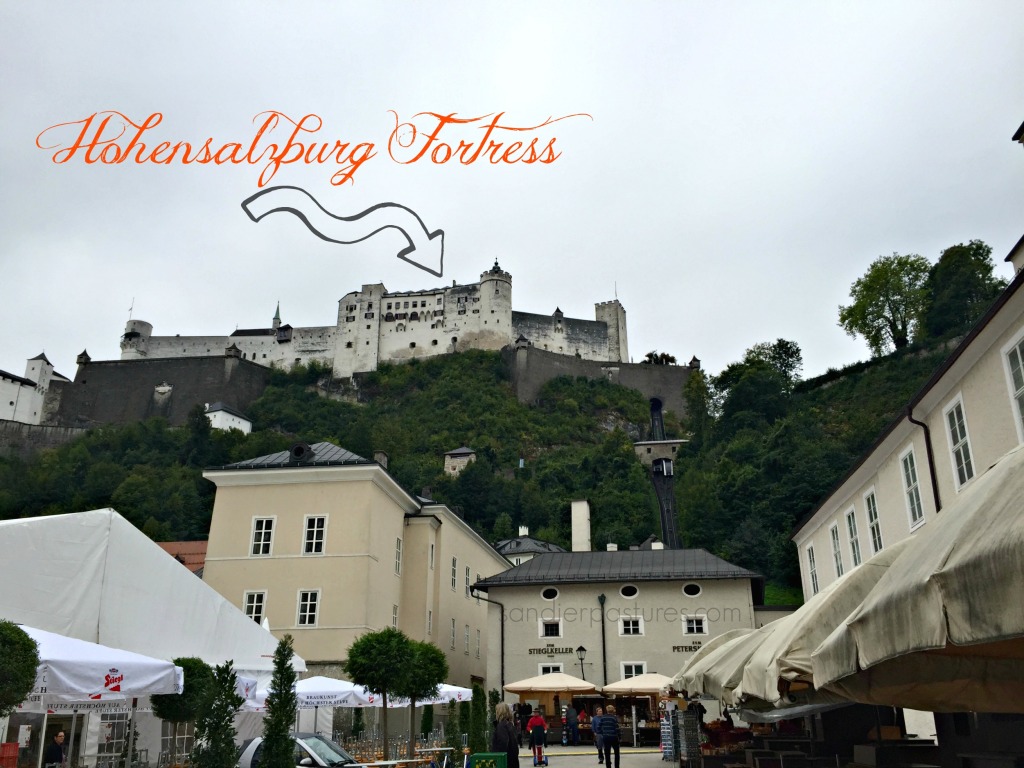 This is the largest and best-preserved fortress in Central Europe and is quite an impressive sight. From Old Town, take the cable railway to the top of the hill. (The cable railway ascent and descent which is normally 11.30 Euros is free with your Salzburg Card). More about this fortress in a separate post! 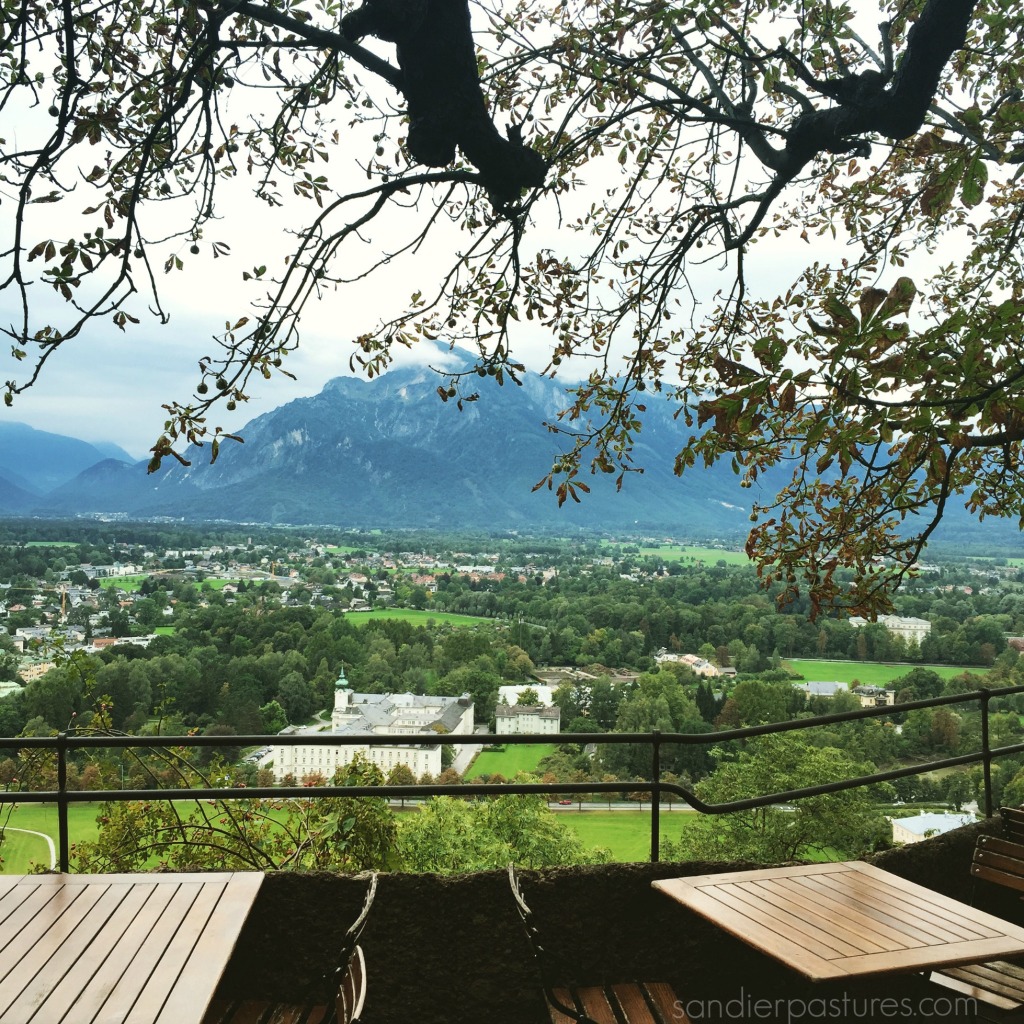 I spent so much time at the fortress because I participated in a guided tour and took a lot of photos. Who can ever get enough being up there, looking at Salzburg from up, and those beautiful mountains over the horizon? In short, it was already lunch time when I descended from the fortress. Oh, and by the way I know you want to ask – YES, in Salzburg, the hills are truly alive! 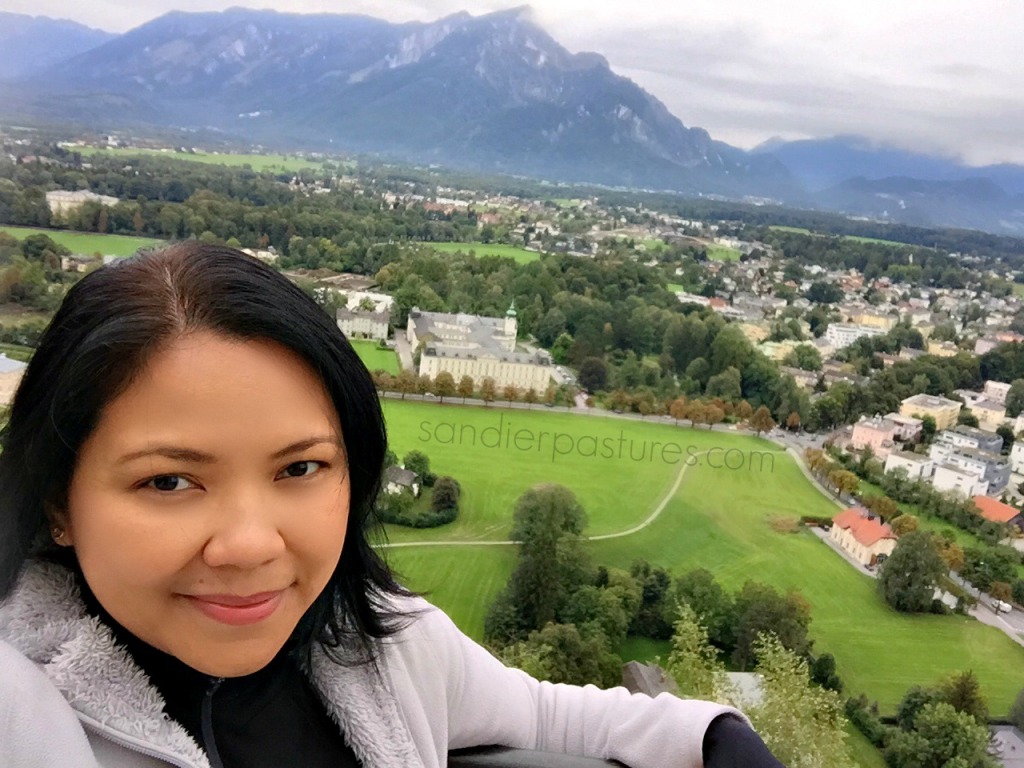 And the Oktoberfest was in full swing. 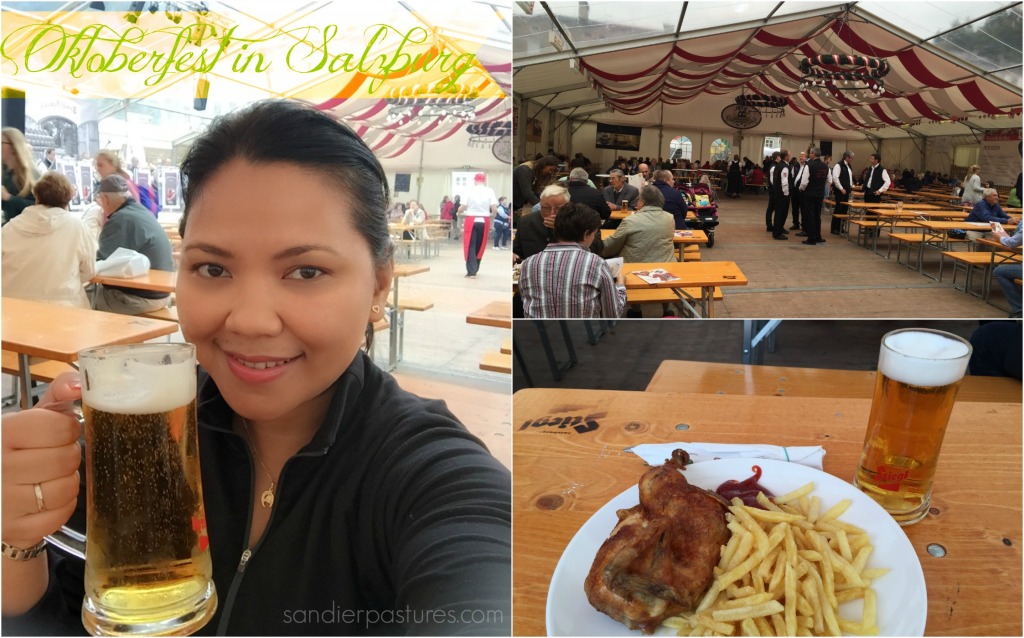 Since I am traveling on a budget but didn’t want to deprive myself some “cultural immersion”, (AHEM), I sat down and chose the cheapest from the menu. The small glass of beer and plate of food cost 13 Euros. It was quite weird to sit down in an Oktoberfest alone but what to do…and I was really hungry already. {The beer was amazing!} 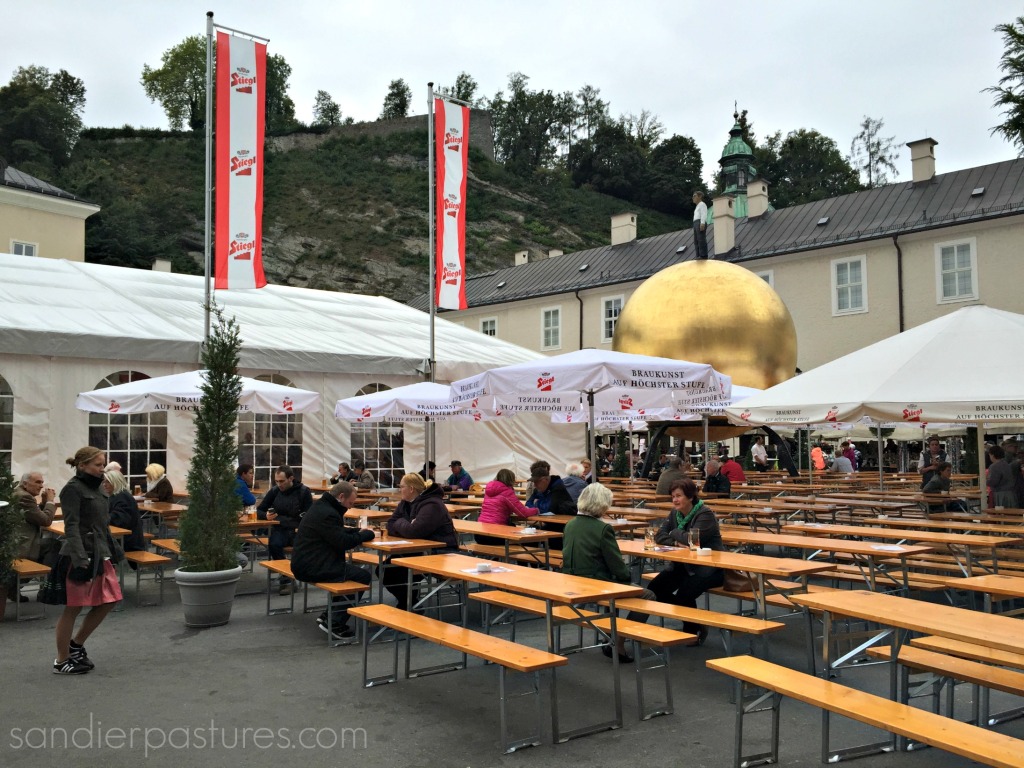 After lunch, I roamed around Old Town, from the main plaza to the little corners. 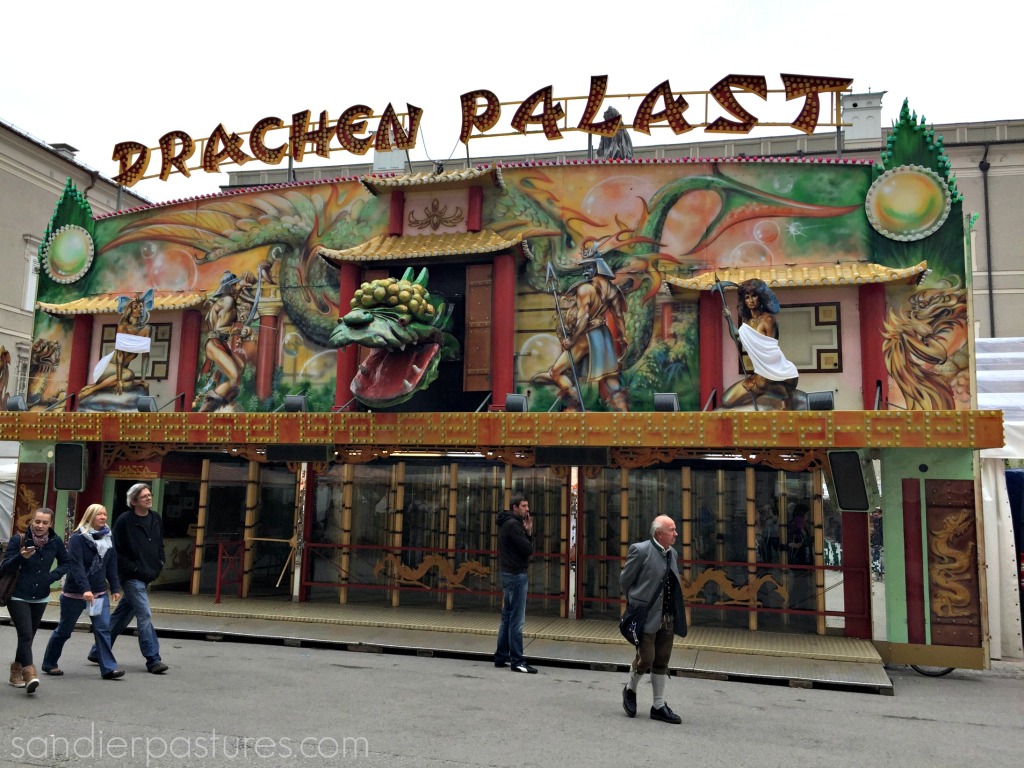 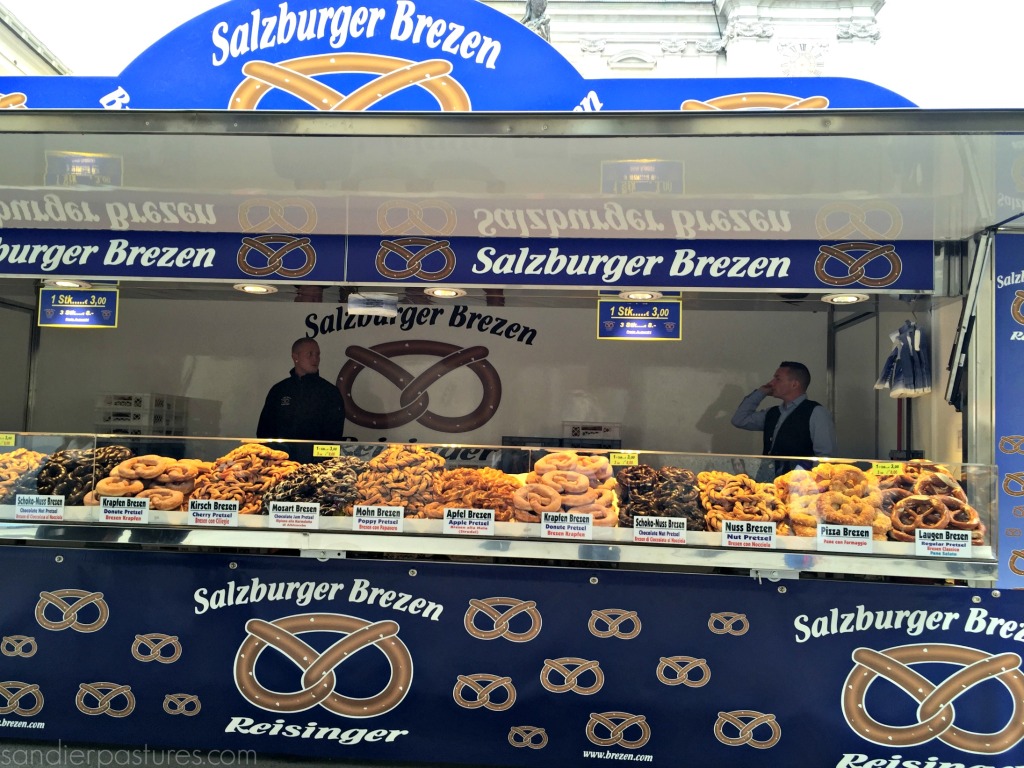 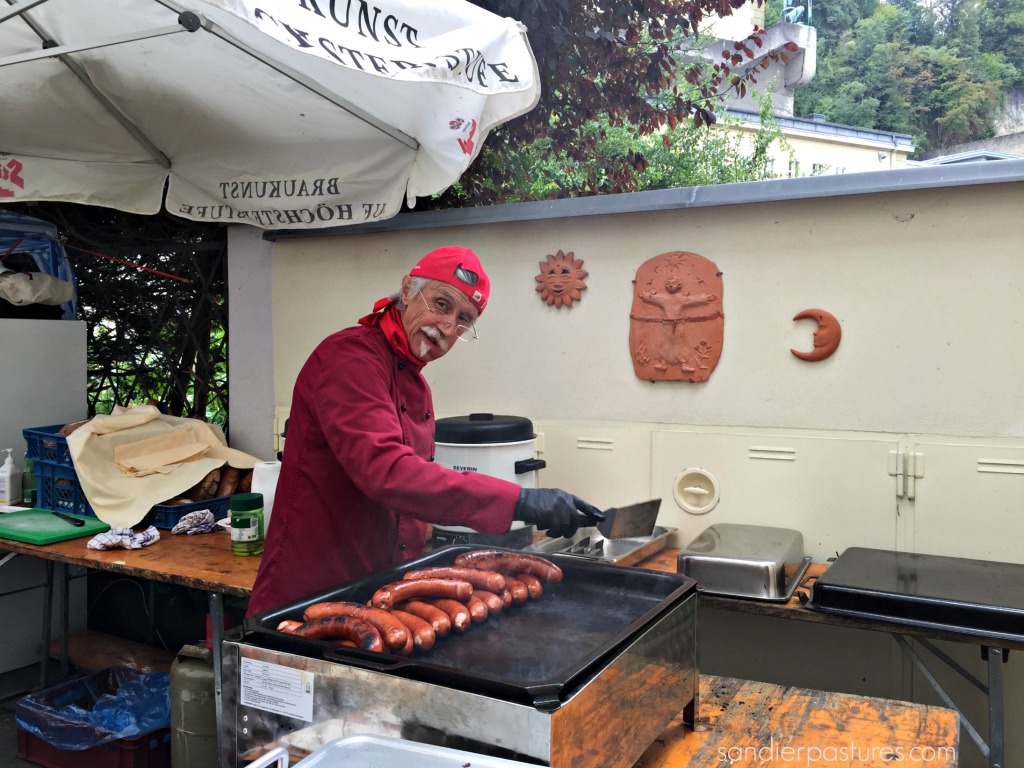 I love that the whole town was so vibrant and everyone was holding a drink, even nuns…and I think that’s *not* juice hee hee. 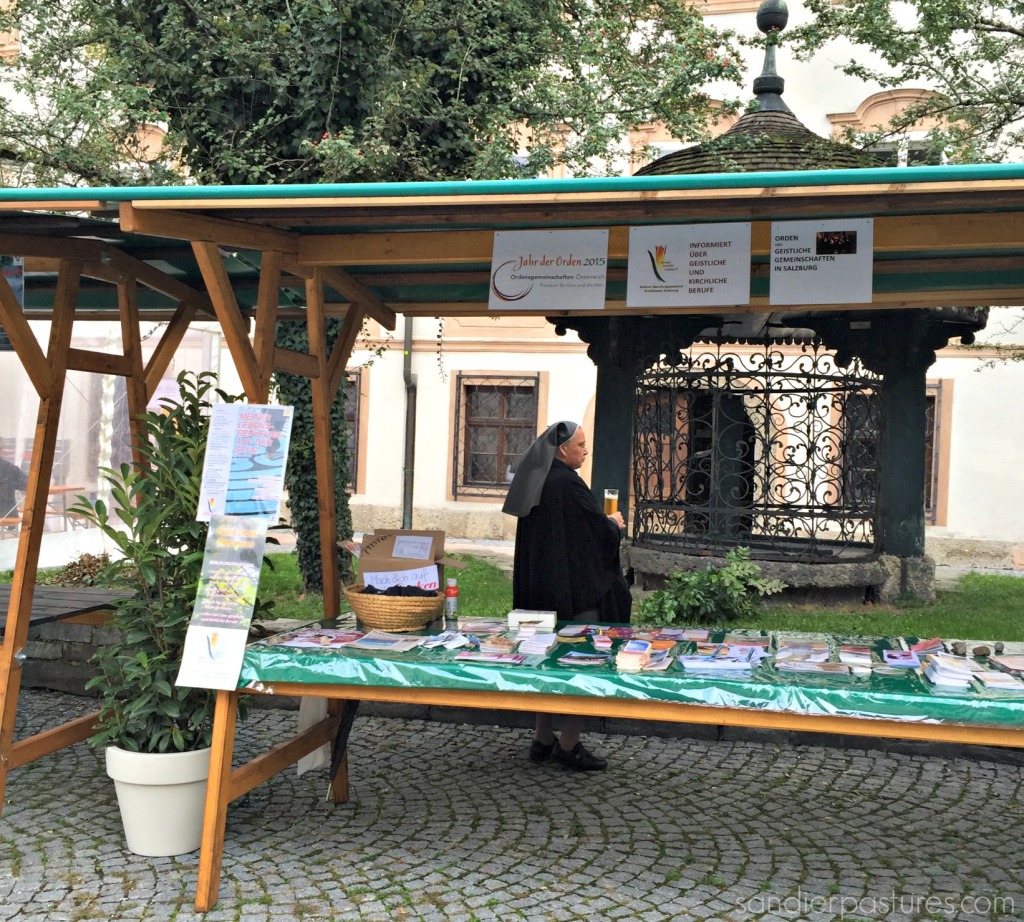 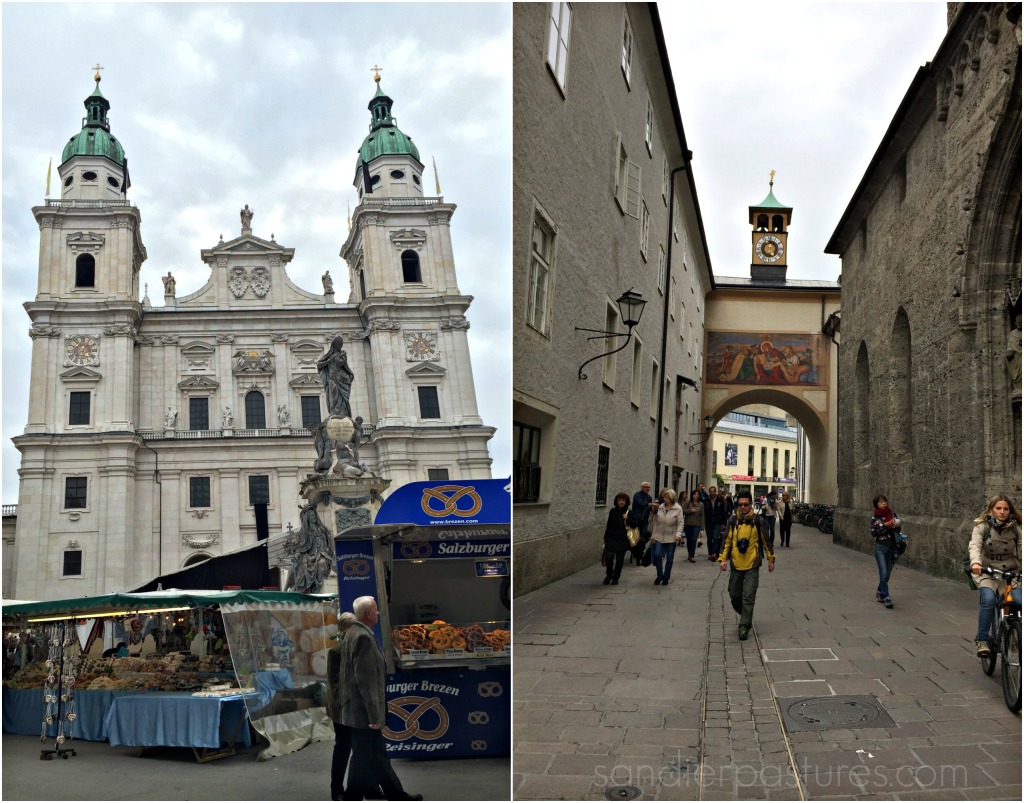 Right in the Old Town is the house where Salzburg’s most famous son was born, Wolfgang Amadeus Mozart. It’s a bit unfortunate that some of the people I spoke to didn’t know who Mozart was…I was so proud to tell them, “I’ve been to the house where one of the world’s greatest composer in the Classical era!” 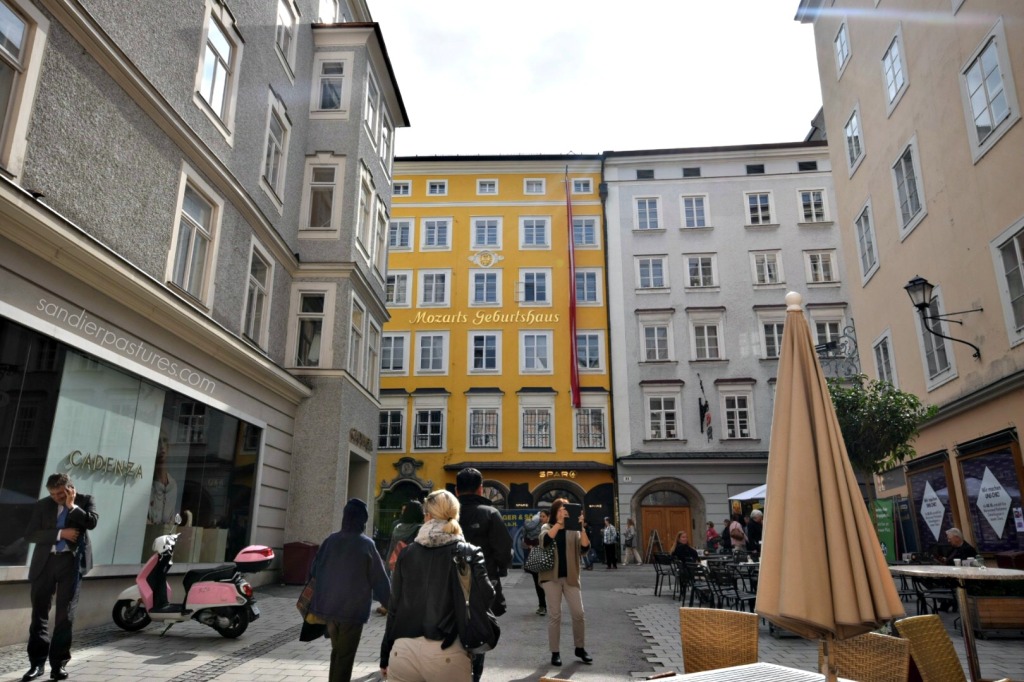 Mozart’s family lived in that YELLOW building and that was where he was born. I learned something from that tour – Mozart didn’t have any descendants! Neither of his sons were married and all died childless. 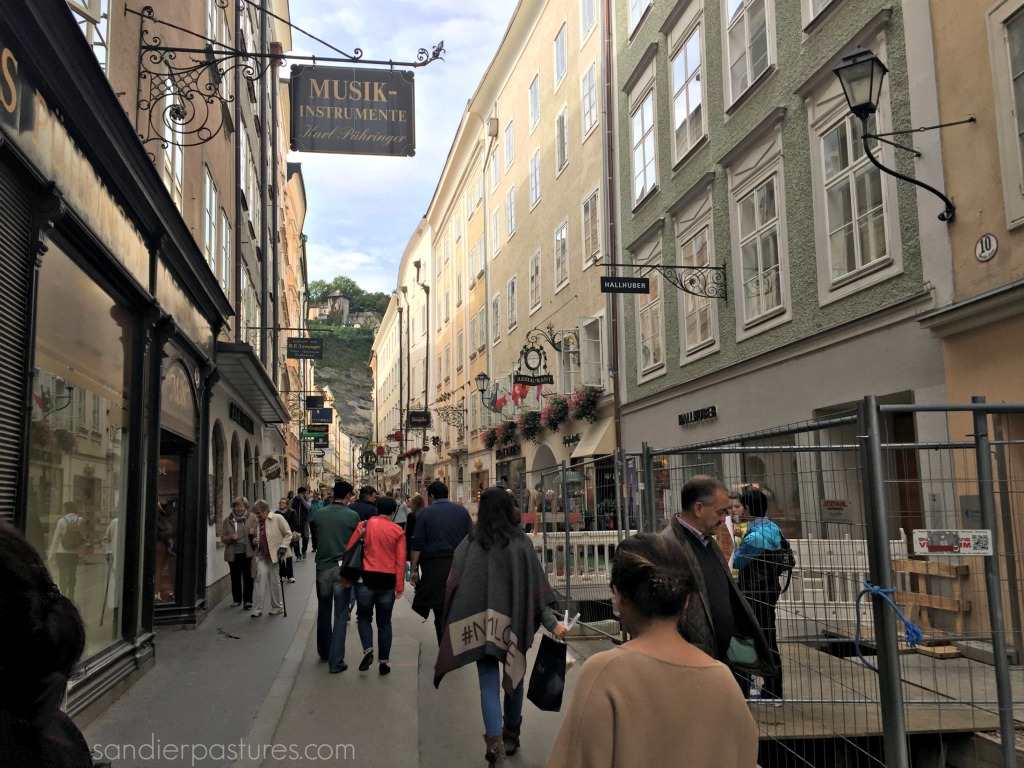 My feet have not recovered from all the walking that I did the day before in Vienna but there was no time to rest, except for a few hours the night before…only a few hours because I wasn’t able to sleep well, excited for the things I’m going to see in Salzburg! 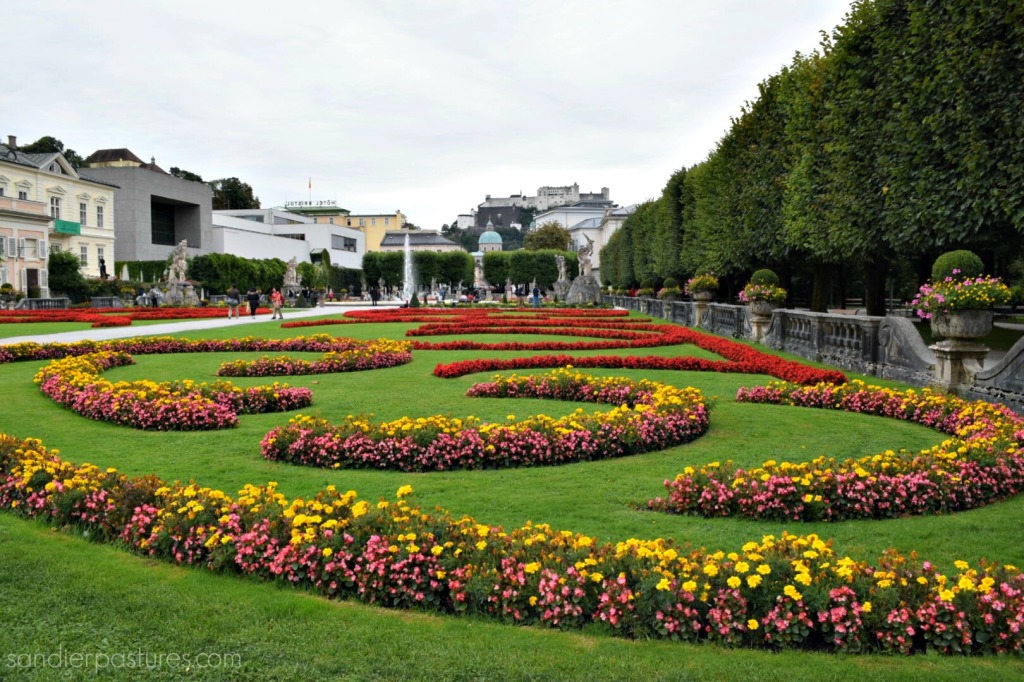 Having a very rushed itinerary wasn’t a joke – my feet’s about to give up already but I have to see the Mirabell Palace and Gardens. A more detailed post later but if you’ve seen the movie, The Sound of Music, you’ll know the significance of this place!

After Mirabell Palace and Gardens, I went back to the hotel to pick up my luggage and headed to the station to catch my 7 pm train to Innsbruck – capital of Austria’s western state of Tyrol, a city in the Alps that’s long been a destination for winter sports. I have a friend who lives there and I planned to stay for 3.5 days.

Final word: if I could go back to Austria again, I will definitely visit Salzburg again and stay for at least 2 days – I need to go on that Sound of Music tour (don’t judge). Then probably, I will do a side trip to Hallstatt, too. It’s only about an hour and a half from Salzburg! LOOK! 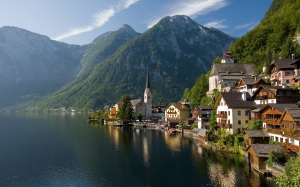 Isn’t Austria magical? It looks straight out of a fairy tale book!

One thought on “24 hours in Salzburg”