If you live in Dubai, you could not miss the huge billboard of Disney On Ice Rockin Ever After in Sheikh Zayed Road. It has been promoted and advertised extensively for months and then finally, it was opening night last night!

I was invited to be at the media preview a few days prior to the opening show and was already impressed. I saw the whole show but thought, I could see it again and again and still enjoy it!

I brought the kids last night because I know without a doubt, they will enjoy it, love it and I wasn’t wrong as was all the parents who were present last night. It was a hit with the kids and with the adults too! The show was amazing, the performances, very flawless. It’s like you’re watching a Disney movie come to life.

The two hour show was divided into segments that included a bit of Pinocchio, then The Little Mermaid, Tangled, Brave and Beauty and the Beast.

Sorry if you love the movie Brave and a fan of Merida but I personally think this segment was ‘off’ as the theme is “Rockin’ Ever After”. I don’t know, I just thought the Disney prince element should be there because of the word “ever after” and Merida didn’t have a prince.

Ariel from The Little Mermaid did some stunts on a suspended rope – without anything to catch her in case, you know…what a talent! 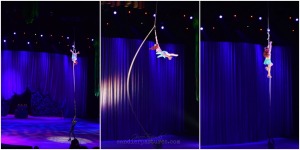 The last segment was from the movie Beauty and the Beast, my favorite Disney animated movie ever. All the parts, the characters were amazing! Very nice acting, skating and music.

I love, love this song!

There is a 15 minute intermission after the first half of the two-hour show so you can stretch and go out to buy food (whisper: as expected food sold at the venue is pricey, normal with events like this).

The kids were in awe at every performance and couldn’t get enough of the lively show. Benjamin will be 3 years old next month and he sat through the two hour show without any fuss until the very end of this very fun ending song!

Disney On Ice presents Rockin Ever After is Produced by Feld Entertained, brought to you by Etisalat, organised by Sport and Entertainment Solutions (SES) and supported by Dubai Tourism and Commerce Marketing (DCTM). The World Trade Centre Arena was transformed into a skating arena using two 64 ton refrigerators and a colossal 425 man hours.

The show will run until the 13th of September 2014, tickets sold at all Virgin Megastores outlets and online at VirginMegastoresME.com. To discover more about Disney On Ice, log on to www.disneyoniceme.com or visit them on social media: Facebook: Facebook.com/DisneyOnIceME Twitter: @DisneyOnIceME Instagram: @disneyoniceme