We toured Dubai for a day, now it’s time to head to the next Emirate of Abu Dhabi!

Our first stop was Yas Marina Circuit and it was eerily quiet. We asked if we could get inside and the security at the gates said yes. We can see the sprawling wide Ferrari World roof at a distance but other than a few gardeners tending the green spaces, no one was there because there was no event.

We were lucky enough to catch a corporate racing event at Yas Marina Circuit. I don’t know anything about racing…except that boy, it makes so much noise!

There were only a handful of cars, less than 10. What happens during the grand F1 race (happens once a year)?

It was very hot that day in Abu Dhabi too, with temperatures swelling up to 37C. Our friend was amazed how lucky we are to be blessed with this kind of weather most of the year – yeah I almost forgot about that. How lucky we are to hang our wet laundry in the morning and get it in dry at midday. 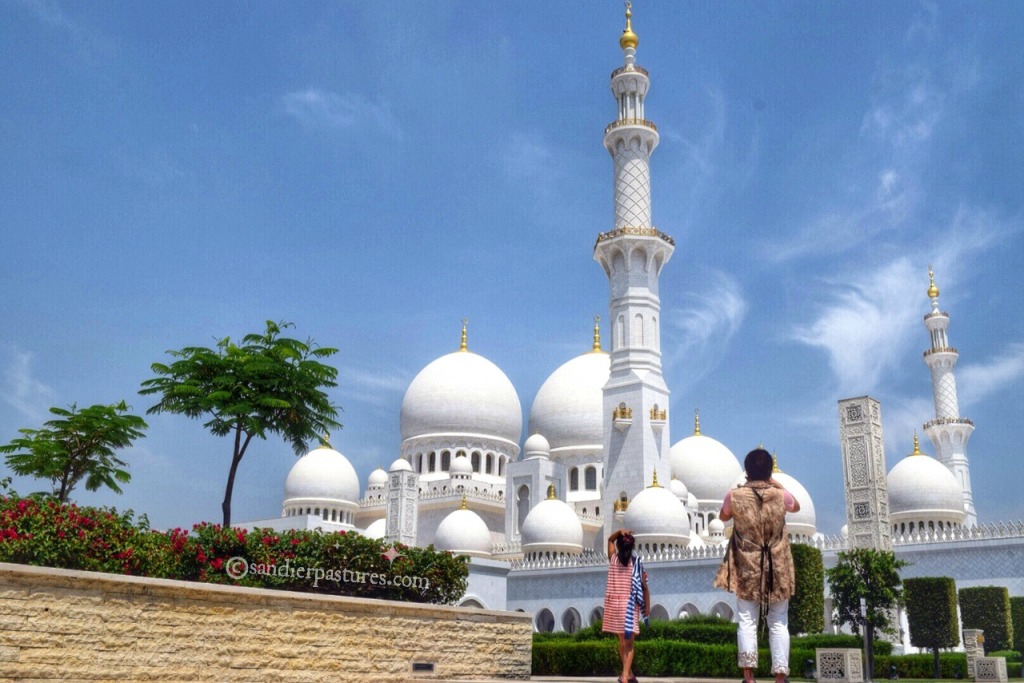 We’ve been to the Grand Mosque a couple of times before – this is a staple tourist spot that won’t disappoint but I think this is the first time we visited when it’s summer. It’s so hot outside you would want to run and seek cover inside an airconditioned room.

Did I mention, the mosque really looked beautiful against the sky that day? I wish I took more photos.

If it was beautiful outside, wait till you see what’s inside. This snowy white mosque – conceived by Sheikh Zayed himself – can accommodate up to 40,000 worshippers and is architecturally impressive inside and out. 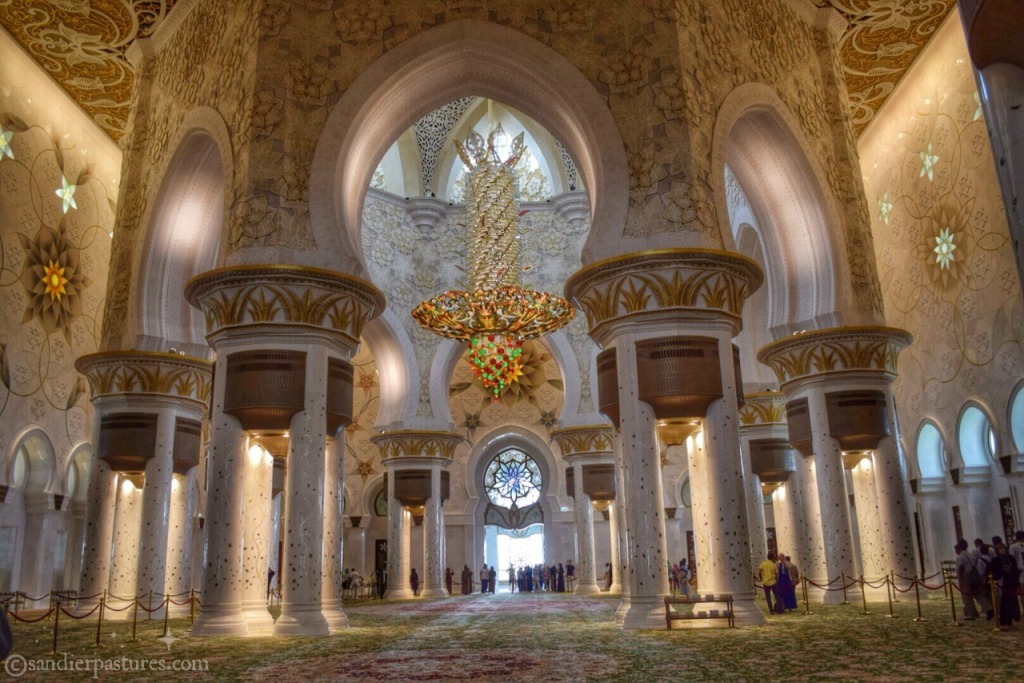 The large Persian carpet was made in Iran by 1200 female weavers working in 3 shifts over 2 years, the mammoth carpet measures 60,500 sq ft and weighs 47 tons. 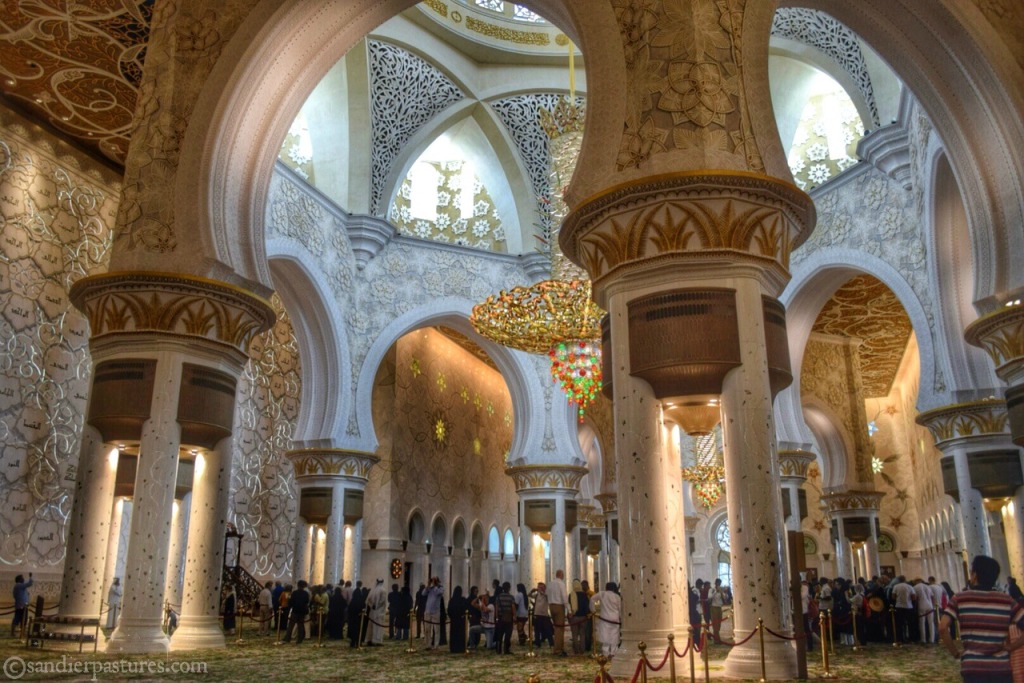 I love how the photos turned out so well (for my standard, at least!). I’ve attempted to get these angles since the first time we visited but with the lack of proper camera, I wasn’t able to. See the red cords? I am surprised they have blocked off the center part of the mosque. There were no restricted spaces and tourist trail when we visited a few years ago.

Other side of the mosque and my favorite blue chandelier.

The other changes include the abaya counter being more organized now and located at a different venue, at the basement of Building B. Also, you now need to present and leave an identification card when borrowing an abaya (women need to wear an abaya to get inside the mosque).  I left my wallet in the car so I did not have any ID with me. 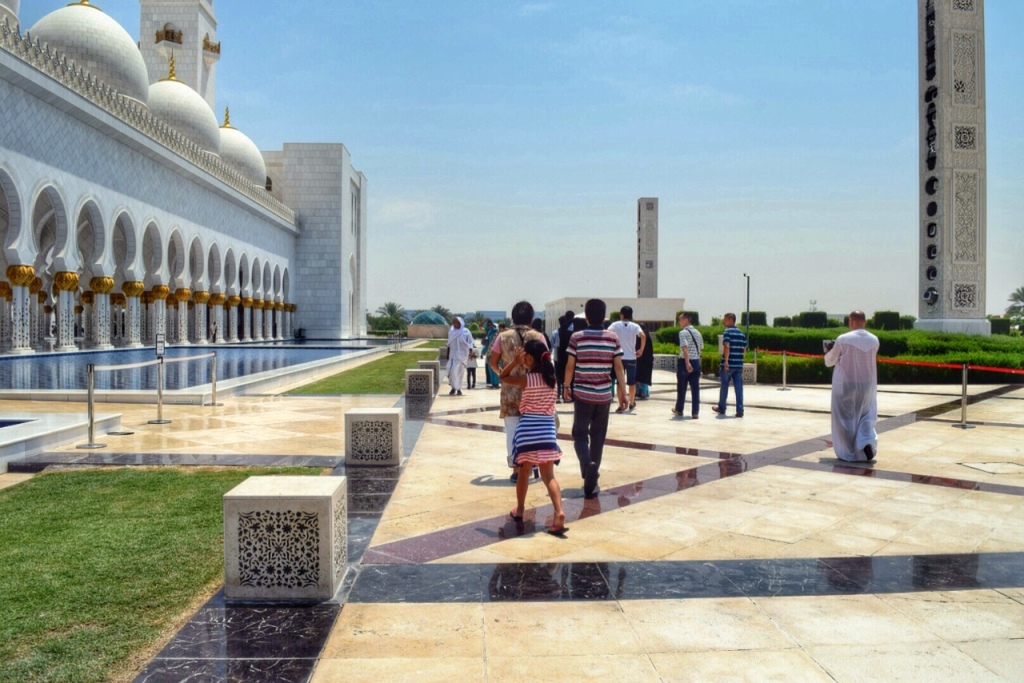 Building B is at the farther side from the entrance, it’s a long walk.

I dreaded the idea of going back to the car but my ever reliable husband was luckily carrying my driver’s license! It as a coincidence that we had the car serviced the day before and he removed the important stuff there like my driver’s license and forgot to put it back. Otherwise, I could not bear think of walking through that hot and humid basement and to the car park in that heat! 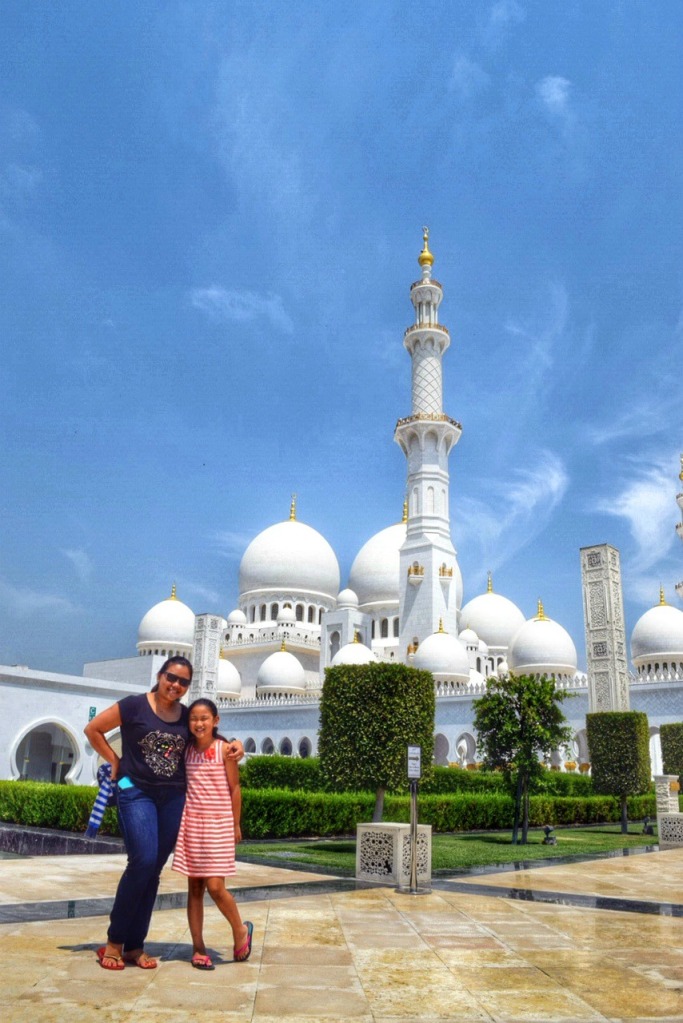 You have no idea how fast we ran towards the shade the moment the camera clicked!

The Sheikh Zayed Mosque is open to non-Muslims everyday except Friday. Entry is free. Please note to dress conservatively when visiting Sheikh Zayed Mosque. Women should wear lose clothing, either long trousers or skirt and cover their hair with a scarf (this can also be provided when arriving at Mosque). Men should avoid wearing shorts. No shoes permitted in the building. No intimate behavior is permitted i.e. holding hands even if you’re a married couple.

Being a tourist is all about feelings of novelty and awe – it gave us a renewed appreciation of the place we live in. Have you played tourists in your own city lately?