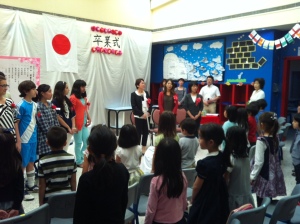 Last Saturday, I attended the graduation ceremony at the Japanese circle where Pristine had been attending once-a-week classes for Japanese lessons because she’s losing her native language skills. The Japanese language circle not only teaches language but they also hold cultural events to allow the children to touch base with their native culture.

I am amazed by the Japanese people – they can certainly make something out of nothing. They totally transformed a simple area to that of something resembling a formal graduation stage: they brought white silk cloth to cover the wall, made a makeshift Japanese flag and other effects to make it look and feel like the real thing.

Most of the children* are half-Japanese and half something else (one of the parents are Japanese). The room was full of beautiful children, all struggling to learn to pick up their native language. It was easy for me to tear up at the ceremony hearing the children read their graduation speeches – I have been there.

* There are children whose parents are both Japanese attending the classes too. These children attend international school here where the medium of instruction is English and their parents do not want them to lose their Japanese language skills.

One of the teachers said in her speech, addressed to the children:

Most of you may wonder, “Why the heck am I studying Japanese?” or “What is the need to study my native language when English is the universal language?!” Well, the answer to that is: living up to your identity. As you grow up, you will have to belong to a nationality group. What is your nationality? What is your root? You are Japanese by blood and where ever you’ll go, you have that in you – learning your native language (or the native language of one of your parents) is a natural, beautiful thing.

The speech struck close to home – I’ve been wondering if we’re asking too much by enrolling her to this extra language class. Aside from English, Pristine learns Arabic and French at the International School she’s attending and she’s doing really well. And Nihongo is not an easy language: there are two sets of alphabets (hiragana and katakana) and thousands and thousands of kanji characters to memorize.

As for asking too much? No. On the contrary, I feel that it is her right to learn it and our obligation to help her not to forget the native language. I know a lot of Japanese adults who lived outside of Japan since they were children and grew up not knowing how to speak, read or write Japanese. All of them regretted it and said if they could turn back the time, they would have been thankful if their parents forced them to learn it.

Pristine has come a long way since she started joining the Japanese circle a few months ago – she has learned to read and write the hiragana and katakana and has memorized 80 kanji characters and learned to write it too!

On her summer vacation this year, we will be going to Japan where she would join a grade school class (taiken nyuugaku*) in her father’s hometown, for 2-3 weeks before the Japanese school closes for summer holidays – to experience being a student there. I thought she’d be terrified but she’s actually looking forward to it!

*We initially planned it a couple of years ago but wasn’t able to fly to Japan due to my pregnancy, having a small baby, etc. I’m really going to make it happen this year!

4 thoughts on “Expat Life: Why the need to retain your native language?”