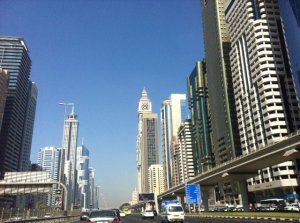 This past weekend, I made taxi drivers rich.

I am not even a fan of taking the taxi because some (read: most) drivers speed, swerve, or declare “it’s my first day of work, Madam” and make you their personal GPS. Some drivers are just plain crazy, thinking the taxi is a karaoke box. But seriously because they’re not cheap than say, taking the Metro or driving your own car.

But at the back of my mind, I hear whispers: “You better shell out a few $$ than die.” or “Money – you can find it again but you’ve got only one life”. Whoever whispers me these things win. Always.

CONFESSION: I am a weakling (when it comes to driving highways and unfamiliar roads + bad at direction so there you go).

Almost six years in Dubai and I have not driven in Sheikh Zayed Road – ok, once when I attempted to be brave (but failed) and missed an exit more than once. That was the end of it! So yeah, I’ve been on Sheikh Zayed Road but only until Dubai Mall, not all the way to say, Jumeirah or Mall of the Emirates. No way – maybe when I ‘grow’ up.

FOLLOW UP CONFESSION: I am so jealous of moms who shoots through the mighty highway even with kids at the back. Super moms like my friend @busymommydxb.

For now, I’ve decided I’d be cool being called coward, sissy, faint hearted and money waster {I hear myself talking to myself with these words!}. At least I know, I will be alive at the end of the day. But I still cringe at the taxi bills I paid!