Have you slept on a train? I have and I am sure plenty of other people have too. Who doesn’t love taking cat naps or even hour long naps on long train journeys?

I think of Japan whenever I hear the words, “sleeping on train” because they take sleeping in a whole new different level, especially on late Friday nights. 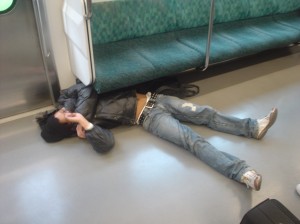 And then there are people who look really tired.

I really wish this is a huge joke!

What has come to their minds in imposing such ridiculous law? The news article is vague, as always:

I hope when the new day unfolds tomorrow, this news article is edited to add, “Sorry for the misinterpretation. Use the Metro, sleeping is allowed.”

What do you think of fining people who sleep on trains? (Stupid, I know…)

8 thoughts on “Fine for falling asleep on Dubai trains!?”