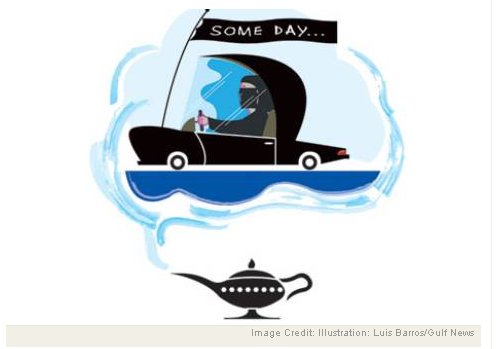 Last Sunday Manal al-Sherif,  Saudi woman was arrested for launching a campaign to challenge the ban on women driving in the country and posting a video of herself driving on YouTube. She obtained her driving license in the US.

According to the news article in Gulf News,

Women in Saudi Arabia are not allowed to drive and must have written approval from a designated guardian – a father, husband, brother or son – to leave the country, work or travel abroad.

This is not the first time that a woman in Saudi Arabia got behind the wheels and filmed herself driving. There was Wajeha Al Huwaider in 2009 hoping that this act of “civil disobedience” will create a wave of change and reform towards fair treatment to women, including allowing them to drive on the kingdom’s public roads. But alas, nothing has come out of it even if there is no official law in Saudi Arabia stating that women cannot drive. It is simply a social taboo that has been taken to the extreme like many other things in Saudi – and sadly, continues until this very day.

The current driving ban applies to all women in Saudi Arabia, regardless of their nationality, and it’s been a topic of heated public debate in recent years.

In a world not too far away from Saudi Arabia, women can drive in Dubai (and the whole of UAE) without any restrictions. We all hope the same kind of basic right is granted to all the women in Saudi Arabia, someday soon.