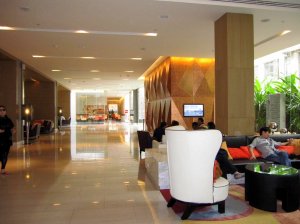 On our first night in Bangkok, we stayed at the newly opened Four Points by Sheraton in Sukhumvit Road, in the middle of the very busy capital city. Amazingly, despite being located near the busy roads, sleep was not a problem.

The hotel opened in December 2010 so the place is smelling really new, the sheets were fresh and the carpets didn’t stink! Everything is in mint condition. And for a two months old hotel (I was there in February), the staff were properly trained and service was good overall.

I like the wide, open lobby with chic and modern colors plus they play nice music inside the elevators. 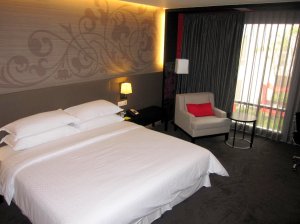 Also, the wall near the tub is a sliding door so slide it and voila, you can watch TV while soaking in the hot tub. Yes? Yes? 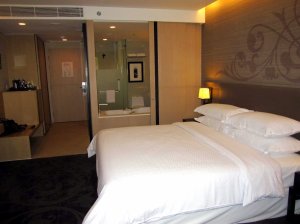 Four Points by Sheraton, I see so many happy guests in your future.

My only ‘little’ disappointment with the hotel was the absence of FREE WiFi access inside the rooms. High Speed Internet Access in Guest Rooms by Request THB 450 per day (US$15). WiFi access is available, however, for free at the hotel ground floor lobby. I didn’t want to pay nor spend time in my pajamas in the hotel lobby late at night blogging so I instead hit the showers and watched TV on my stay there.

Still it would have been more awesome if internet if free in all the rooms.

And because of the lack of time, I wasn’t able to use the pool at all. Ah, shame it was so inviting!

Overall, it’s still a great hotel so on your next trip to Bangkok, do remember:

Hotel name: Four Points by Sheraton
Location: Only 5 minutes away from the Sky Train Asok Station so no need to sit on Bangkok’s traffic!