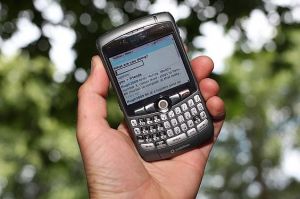 It’s another day in Dubai land where we stop and ask, “What were they thinking?” In a huge step backwards, (citing security fears) the UAE’s Telecommunications Regulatory Authority (TRA) will suspend Blackberry services from October 11, 2010 until an “acceptable solution” is developed and applied.

The UAE objects to Blackberry data being exported offshore and managed by a “foreign, commercial operation.”

TRA said Blackberry data services are the only ones operating in that method. They added:

Today’s decision is based on the fact that, in their current form, certain Blackberry services allow users to act without any legal accountability, causing judicial, social and national security concerns for the UAE.

Blackberry maker Research in Motion (RIM) typically manages the services on its own encrypted networks, rather than leaving the local government control the content – with this UAE is not happy.

I don’t own a Blackberry device but I did? I would be mad. There is an estimated number of half a million Blackberry users here and the service suspension caused a lot of uproar via Twitter. What is more fishy about this one is that a mere weeks before this chaos, telecommunications company Etisalat has slashed BB rates and offered BB devices at discounted prices. What was that for, to clear stocks!?

Blackberry is a staple to both business and personal communication needs so banning services such as BB Messenger, Email and web browsing is absolutely absurd. Hopefully a solution will be met with BB maker RIM and a more sensible announcement will come up real soon. And hopefully, not one of those “you readers misunderstood it” type of announcements that happens every time a stupid news like this comes out.