We got to see the cat walk show at yet another new mall in Dubai, at Mirdif City Centre. You see a new mall pops up every now and then, adding to the long list of malls in Dubai, each competing to create something different from the other.

The new Mirdif City Centre is near, just 15 minutes from where we live. It’s new, huge, have an indoor sky diving attraction (I bet to compete with the indoor ski of Mall of the Emirates or the huge skating rink at The Dubai Mall).

When we got there, there was a fashion show for Dubai Fashion Weekend. Now a fashion show in a Muslim country must be a far fetched idea, some people might think but no, it’s a regular happening here. Pristine participated in a kid’s fashion show last year but it is our first time seeing grown-up models in action. We were early to get the best seat (no entrance fee – it was in the mall’s main galleria).  Pristine thinks this model is beautiful: 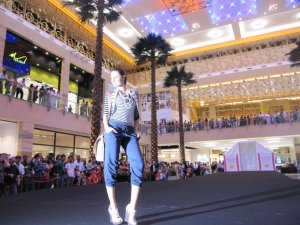 (sorry her face is not so clear here since I snapped my camera at the same time the other photogs with huge cams and flashes clicked theirs) Me? I think this model rock.

She might not be the most glamourous in the bunch but she’s still beautiful, carries herself well and? She’s married with two children (12 and 5!). Now that is the glam for me! Because you know what? to look good in your 20’s is almost effortless but in your 30’s or 40’s, AFTER children? That requires effort!

One thing very distinct though about the fashion show we watched was that models were baring some skin – off shoulder blouses, some plunging neckline, a model not wearing a bra (bra!) but what surprised me?

They wore tights under short shorts. Why?

At first I thought it was the new fashion trend but the people around were talking about it and I heard: the models can bare their shoulders but needs to cover their hot legs. Look:

The organizers of the fashion show must have adhered to honor the “Respectful Clothing” policy inside the mall. But while the models aren’t allowed to parade their bare legs exposed in the 5 meter runway, I see these girls stroll the huge mall in this getup:

3 thoughts on “Legs covered at the Dubai Fashion Weekend”