If you’ve visited Dubai, you’ll be amazed how flat the place is. As long and far as your eyes can see, there are no mountains in the horizon. The above photo was taken by M atop some random high building, showing how there are zero mountains in the city of Dubai.

I love me some mountains and have missed to see them since we lived in a place like this in Japan: 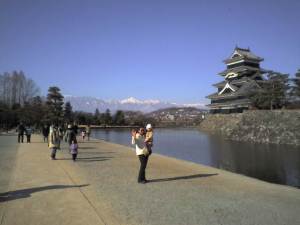 We drove far out off the city to go to Hatta, is an oasis town located 130 kilometers from Dubai. It promises mountains, wadis (desert streams) and rock pools. A great respite to the monotonous Dubai cosmopolitan scene, I must say. On the way to Hatta, you will pass a bit of Omani territory and there will be a passport check. Don’t forget to bring your passport or any identification card if your passport is being held by your company, like me.

It was almost lunch time so we dropped by Hatta Fort Hotel to rest and have our lunch. We saw this pretty camel, well, sitting pretty in the sun. 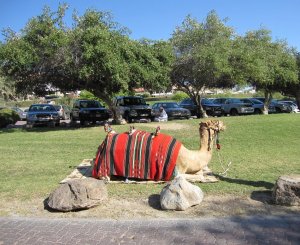 You know what happens next.

Notice the oh so beautiful blue sky? That’s what we love about “winter” here in Dubai! My two pals here are even wearing short-sleeved clothing. After the camel ride and a burger lunch (as usual, Pristine had her own packed lunch since this kid do NOT eat burgers, at all), we got into the car again in search of the mountain range mentioned by our guide – my husband.

After about 20 minutes, there it was!

M says we need to go down the valley to see the desert rivers and water formations. He never said we’d be trekking so I was kind of upset that Pristine did not have the proper shoes to which he solved by carrying her piggy back style. She was amused. I found this tree on the way down.

It reminds me of the bush that burned somewhere in the Moses story in the Bible.

The rock pools and wadis: 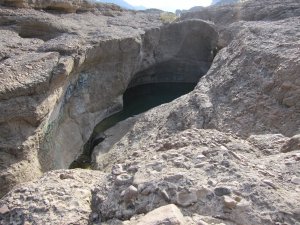 I suppose there’d be more water if it’s the rainy season. 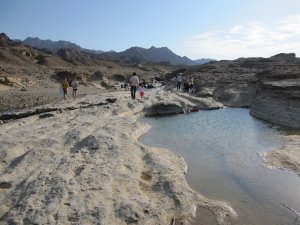 The rock formations tell me this place used to have plenty of water some tens or hundreds of years ago? I wonder where it all went.

The mountains of Hatta do not resemble the snow capped mountains of Japan during winter but it was awesome in its own way. I’m glad we went despite all the dust and fine sand in our feet.

The mountains of Hatta look like mountains but with no trees in them, they look really bare, like huge lumps of rocks instead of mountains. No sound of music will make these hills alive. Ok, bad joke.

17 thoughts on “There are mountains! There is water!”