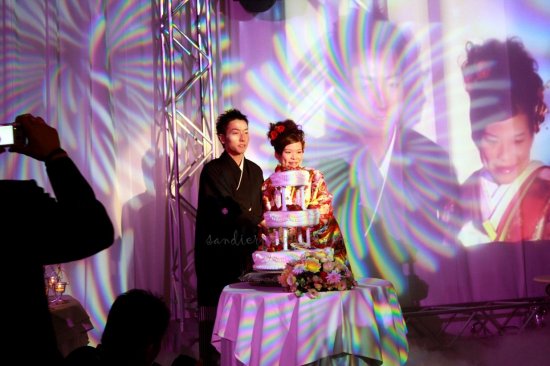 I’ve never been to a Japanese wedding party before even if I’ve lived in Japan for more than ten years.

I know that automatically sounds like I have no friends. I think. But really, it’s either most of my friends were already married and the unmarried who decided to get married lost my telephone number when they got married or the others simply eloped and didn’t hold any party.

Either way, that still sounded like I didn’t have friends. Bleh.

But in Japan, not being invited to a wedding party also means savings – because all the invited people are OBLIGED to give money as gifts. You’re invited? You’re doomed. The norm is 30,000 yen (US$330), although with the crisis these days, I’ve seen envelopes with only 1/3 of the obligatory, traditional amount. You can’t give 20,000 yen because that would mean, 2 bills of 10,000 yen each and superstition says, it denotes splitting of the couple. You know, a couple, 2 bills, one bill of each. Separation. Whatever.

So early this year, when my brother in-law said he’s going to get married and that he’s inviting me, I immediately booked a flight for myself and Pristine. The hubz didn’t care much – he was talking about whether he’s going to be able to attend, how much it will cost, how long we’ll have to be there, if he has work commitments during that date, etc, etc. My talk with the travel agent finished while he was still deep in his thoughts.

My (only) BIL was only 20 when I first met him. Young, clueless (you’ve got to believe me, there are lots of 20 year old’s in Japan who are still clueless) and shy. He would talk to me in a very slow manner because judging from the way I look, he thought I don’t speak any Japanese. He later confessed I’m the first foreigner he ever met in person. I think that deserves me a plaque or something: “the first foreigner to step foot in the house of _____”.  He was nonetheless friendly and accommodating.

It’s been 10 years since we first met and give or take 5 girlfriends later (can’t blame, the boy’s good looking), we received his marriage invitation. I was like, finally!

He had a very traditional wedding ceremony, very Japanese in all kind of ways. After the formalities at the Shinto Shrine, the 4-hour reception party was held. FOUR HOURS! Pristine was able to take a nap and wake up and the party wasn’t finished still.

The party began with the bride and groom entering the party hall from the stage and taking a bow.

I hope you don’t expect me to document what happened in those four hours. It will be awfully long. Just the highlights, ok?

There were more than one hundred people in the party and in Japanese standards, that’s supposed to be huge. There were less than 50 in my own wedding party. In Philippine standards, that is like, smaller than a birthday party, especially if almost half of the attendees were my family members. I am going to sue my husband who constantly tells me our wedding was a circus.

In the ten years that I’ve known my brother in-law, he strikes me as someone unromantic. Remember the five past girlfriends before this, people. I’ve heard stories how he dumped this girl and that so when this happened?

I was totally surprised…and totally cried like a scorned ex-girlfriend.

What happened was, BIL wrote a love letter and read it in front of his bride and in front of the crowd bravely, without the help of alcohol. It started like this, “I want to take this opportunity to tell you how much I love you…and that I apologize for not proposing to you properly…”

So apparently, BIL did not give a fairytale proposal (he’s Japanese, after all) so he’s doing it now, gentlemanly and fairytale-lishly, on their wedding day. He also promised her he’d learn to cook and iron clothes…the perks.

M didn’t cry so I used his necktie as my hankie. He deserves that for being insensitive, don’t you think so?

After the crying session, there were performers, ranging from friends to office mates to drunken relatives who wanted a slot in American Idol. I had fun. It compensated the one liter of tears I spilled out.

*insert me walking around, with a bottle of beer in hand, making rounds of greetings and formality stuff to them extended families (going around pouring beer + pointless chit-chat is customary)*

Then the couple vanished for a while and voila! They came out of the stage looking like Barbie and Ken.

And then they bow again. 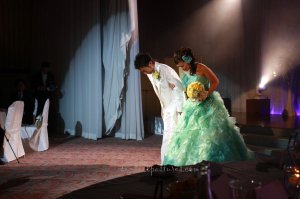 You gotta expect that from all Japanese functions. Then again there were show-like attractions, games and of course, eating. When the party came to an end, there was a part where the bride and groom will read a letter addressed to their respective parents.

My MIL wasn’t in the wedding ceremony at the shrine nor at the party. Instead she was at a nearby hospital staring at the ceiling, contemplating on things only known to her. Her last son was getting married, yet depression got the better of her.

BIL read another letter to his parents – his father was there, accompanied by his father’s older sister (in place of his mom).

“Thank you everyone for coming to the biggest celebration in my life so far. I’m happy to have all of you today. If there’s one single regret I have, it is the fact that I wasn’t able to prevent or helped my mother from her depression and because of that, it is with great sadness that she isn’t here.”

(Sorry, I can’t translate it to give the same intense meaning in English)

At this point, my brother in-law cried. He cried like he has never cried before. He sobbed like a little child wanting his mother, for goodness sake! He hugged his father and cried on his shoulder. Of course, by now you know that I cried too.  How many times should I cry on this wedding, dammit! I’m confusing my daughter already. She didn’t know what to do with me.

Despite all my crying, I immensely enjoyed that wedding party. Not only did I experience something extraordinary, I came to know my brother in-law more and the fact that he’s capable of writing sweet loveletters. And crying in public – so unlike his brother.

18 thoughts on “Who knew Japanese weddings can be so dramatic”