Sorry for the lack of creativity in the title. I’m trying to tell a story here – in photos and in words, hoping that I can be able to relay the event, even half interesting as it was really, as I saw and experienced it.

It was my first time in a traditional Japanese wedding and did not know what to expect. No one said much as to what I should do, how I should act, what to wear or whether I should show my teeth when I smile in the photos or not. On October 10, I was only asked to wake up early, tend to Pristine and greet some guests. I guess my father in-law was too busy to give me the details. Oh well. Let’s roll, this will be a long post.

Thou shall not sleep!

So I woke up early at 6 am with the sounds of people arriving downstairs (we were sleeping on the second floor in my in-law’s house). I had to walk past all the guests with unkempt hair and wearing the just woken up effect on my face. There is no washroom/shower room upstairs.

I met my brother in-law already dressed up. He is wearing a traditional wedding costume for men called a Montsuki (my hubs wore the same when we got married). As all groom to be on their wedding day, he was beaming. 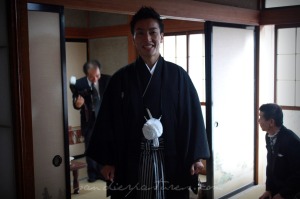 I woke Pristine up and we showered, dressed up and got ready for the big day. In Japan, the bride enters the house of her husband to join the family there. So in traditional Japanese weddings, even though younger generations don’t live with the groom’s parents anymore, the day starts with the bride coming in the morning to pay respect to her new husband’s family.

Here she is, all bundled up early in the morning greeting her new in-laws and other guests in the house who had come to see her. Brides wear traditional wedding kimono called a shiromuku but she put on an uchikake or a colorful red kimono as well. 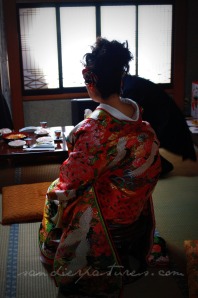 Here’s a sideview of the bride. The woman behind her was specifically hired to be her assistant all throughout that day. She’s there to fix the kimono everytime the bride sits and stands.

While the adults were busy with their chit-chats, two of Pristine’s friends (daughters of M’s friend) came to visit and entertained her. These three only meet once a year since they were babies and seem to pick up what’s left and so happy to see each other again. They don’t even fight for toys. They get along really, really well or is it because they only meet once a year?

A photographer was hired to take photos of the occasion. It was hard for me to sneak in photos of the couple but finally made it – half-successfully as I wasn’t able to avoid a random head shot at the bottom. The woman half-shown on the right is my MIL. She came to see her son and his bride. Afterwards, she has to be shuttled back to the hospital.

When everything was ready, the bride and groom posed with their respective parents outside of the groom’s house before proceeding to the shrine for the wedding ceremony.

My FIL had to deal with the whole wedding thing with his older sister as proxy as his wife (my MIL) has been confined to the hospital because of depression. I feel sorry for my brother in-law.

As we all come out of the house onto the waiting buses to take us to the shrine, the neighbors lined up to see the bride. It’s part of the tradition. All the elderly women standing here are over 80 years old, by the way.

We arrive at Suwa Jinja, a big shrine located several meters above the town. It had been raining everyday since we arrived in Japan but luckily, it wasn’t raining that morning or else, they would’ve to create a way to carry the bride with her expensive dress unscathed all the way to the shrine.

Inside the shrine, the couple was seated as the procedures were given to them.

The groom signed something (might be a marriage contract?). Can you tell I’m struggling to take a photo here? No matter how I lean to the right, I just couldn’t avoid the bald head on the left bottom.

Can you see the look of love?

Then we had to transfer to the main shrine. The hubs is assisting Pristine through a short flight of stairs. I love to look at him when he’s wearing a formal suit, even from the back. He knows this.

We were greeted by an officiating person. Pristine asked, “Mom, is he angry?” LOL

Though it’s the autumn rainy season, it didn’t rain that morning. The future looks bright.

The ceremony was so solemn that it was a shame to make click-click-click noises with my big camera. No one, except the official photographer did so. However, managed to get a few video clips to be uploaded later – watch out for it. It was a great experience for me, something I would keep forever. My husband only has one sibling, his brother so this there might be no more traditional Japanese wedding ceremonies to attend for us, well, at least for me. That thought made that day more special.

Next: Photos and stories at the reception. I cried!

21 thoughts on “And the boy gets married”