The view overlooking the sea at Palm Jumeirah is beautiful, especially during sunset.

This photo was taken during the cooler month of December. How else would you explain the people roaming outside if it’s the peak of summer, like now. It’s “winter” in Dubai in December so it being outside waiting and watching sunsets is not a problem at all. I am sure many of you think that it’s eternally hot here but no, it’s not.

We get to see the night fall at Atlantis Hotel.

This is an unedited photo of the shot I took with a nice bokeh shot of Pristine with the Atlantis Hotel at the background. I have an SLR with cheap prime lens so this is nothing but one of those “accidental shots”.

The crescent part of the man-made island Palm Jumeirah acts as a breakwater and has over seven million tons of rock. On the side of the road, there’s a cement wall barrier and the rocks used to reclaim the sea can be seen. 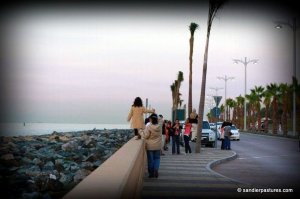 Staying at the Atlantis Hotel maybe expensive but going to Palm Jumeirah and strolling around is free. It’s great for those early morning, late afternoon strolls – we just have to wait for the weather to cool down before going there again.

If you liked this post, check out my other posts, Visiting Atlantis Hotel by monorail & Dubai’s first monoral at Palm Jumeirah.

10 thoughts on “Night falls at the Atlantis Hotel”