We left Japan to relocate to Dubai when Pristine was just three years old. I don’t know how much she remembers the place but I am betting not much since she is awed and wide-eyed and “open-mouthed” when we were in the big city of Tokyo.

She’s overwhelmed of the trains, the station and all the people. 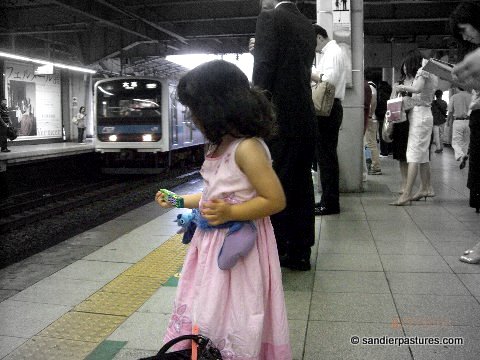 It’s her first time seeing trains come every minute. In the place where she was born and where we lived before coming to Dubai, trains come only 4 times per hour, maximum. Life in rural Japan is simple, so simple that I didn’t have to do this:

Tokyo is a big bustling city, chaotic to say the least. People are always running, as if on a round the clock deadline. On weekdays, you could be lost in the crowd so easily but not when you’re wearing something exquisite.

It was summer when we were there and during summer time, there are a lot of festivals. The Japanese love to wear their traditional summer kimono called “yukata” during this season.

There was one lady in kimono inside the train as well. 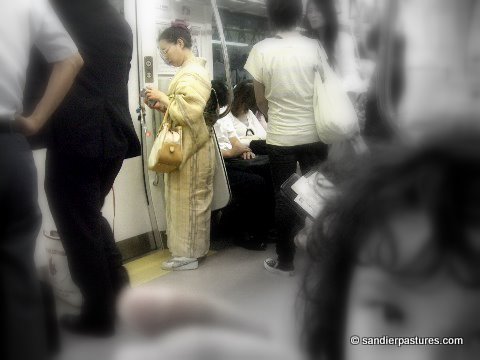 I had to be discrete when taking these shots or else I’d be in trouble. The Japanese value their privacy so much or maybe too much. Hey! I caught Pristine’s eyes and they look scary, had to take a photo again.

There! No more horror-type eyes in the background. 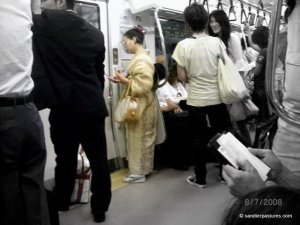 Summer in Japan is hot and humid.

No, not as hot as in Dubai but with almost the same humidity. We all know that it’s not the heat that kills, it’s the humidity factor. Top to that, the Japanese love the environment too much that they have set rules not to lower down aircon temperature to less than 28C! In that sense, Dubai is more thrivable!

This Tropicana juice is Pristine’s favorite drink when we were there. She got it in the vending machine inside the train station. The vending machine experience delighted her so much and she has fallen in love with Japan’s juice fridge (as she calls it)  ever since. Ah, if only the juices and other drinks were not three times as expensive as those we buy in Dubai!

We had to transfer three times to get to our destination and Pristine got hungry. I am too glad there’s an Onigiri-ya san (onigiri shop) inside the busy station. 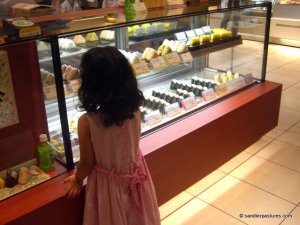 Yes, those are rice balls in so many different flavors. The Japanese love rice very much – it’s still a wonder to me how they stay so slim (most of them at least!) while they devour these carbo bombs on a daily basis!!

Pristine loves them so much and I always carry them whenever we go. In fact, we have one in my bag but when she saw these varieties available, she was sucked into another world.

15 thoughts on “Little girl in the big city”