Meeting locals and/or making friends with them was such a remote possibility for me, even after living in Dubai for more than two years.

“Locals” as we call UAE nationals only compose a small fraction of Dubai’s overall population. Think ONLY 20% of the entire population. So here you could see so many Filipinos, Indians, Pakistanis, American and other expats from about 200 different countries and a handful of locals in one city.

I see them in malls and in the streets but they seem to be aloof and naive – it’s almost impossible to engage in random conversations with them or better yet make friends with them. While we (expats) live with them in the same city, I always felt that they live in a different, parallel world.

Just an FYI, Emiratis work in the government sector and there are only a very few of them in the private sector. There’s no local working in the company I work now. Be aware of the fact that there are more jobs than the number of locals so expats are needed.

My husband volunteers for an organization teaching Japanese to the locals every weekend.

~ an Emirati student writing Japanese on the board ~

Since I always have to work on Saturdays, I only got to hear the stories from him like some of the locals are actually nice and easy to talk to, that they are fluent in English, that they talk alot about their country and how they think about themselves being the minority, etc and how his students are so eager to learn about Japan and the Japanese language. 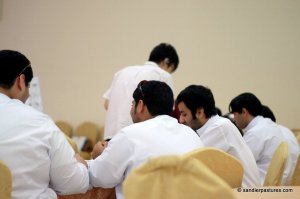 Last Saturday, I took an off from work and went with him. For the first time in my stay here, I met and interacted with Emiratis. Interacted means I didn’t only met them in the eye or bumped shoulders to shoulders with them but actually spent time with them and talked to them! They were there to learn Japanese and I am amazed by their diligence learning a difficult foreign language. After 8 weeks, (despite only having once a week classes) they were able to memorize, read and write the two sets of Japanese alphabet!

After the 2 hours class, they had a class party to celebrate the end of the curriculum. We had Arabic and Japanese food. Yum. These beautiful cupcakes were brought by one student and I post them here just because.

There I got to mingle with the locals and got to know some of them.

I told one of them (a guy) that this is my first time actually talking to someone from the UAE and he said, “Oh, I’m sorry. That’s not nice of us.”

Honestly, I didn’t know what to expect, how to or what to talk with them. I don’t know why I fear if I would upset them with my conversation or something like that. There’s this invisible wall between them and me (I know most expats would agree) that’s difficult to explain. In fact some locals are aware that expats are intimidated by their presence, find them unapproachable or sometimes arrogant. But you know what? They think the same. They think it’s not easy to approach expats as well (although some Emiratis do not see the need to).

The local I talked to said, “Why? We’re all the same. Some locals are eager to talk to expats too and ask them what they think of our country. Wouldn’t that be a good conversation?”

While talking to him I thought, not all locals are arrogant and unapproachable. There are bad and good people, regardless of nationality!

I talked to a group of young ladies and asked so many questions. Will they want to work after marriage (I got a big YES on this one)? Do they love traveling (yes they do! and so many of them have traveled extensively over Europe and the Americas!), why do they study Japanese, etc. We had an hour of lovely conversation. They even agreed that I take a photo of them with Pristine. 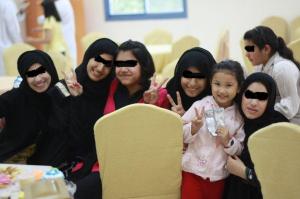 At the end of the day, as we were saying our goodbyes, they invited me to visit them in their houses. Some of the ladies want to hear my Japan story and want to spend more time with me.

I’m glad I came to that class/party. It was a precious experience and an eye-opening one, too.

If  you’re an expat in Dubai, do you have Emirati friends? Where did you meet them?

16 thoughts on “Mingling with the locals”